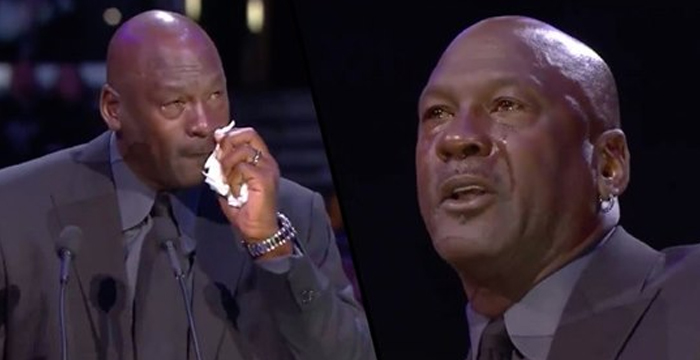 Michael Jordan had tears streaming down his face as he remembered his “dear friend” and “little brother” Kobe Bryant at a memorial service in the Staples Center in Los Angeles on Monday. Jordan was among the basketball players and coaches who eulogized the former Los Angeles Lakers great who depart, along with his daughter and seven others, in a tragic helicopter crash in Calabasas, Calif., late last month.

Jordan, the six-time NBA champion, gave a heartfelt speech about Bryant and how he went from a “nuisance” to a part of his own family. “He was like a little brother,” Jordan said. “You know all of us have brothers, little brothers, little sisters, that for whatever reason tend to get in your stuff, your closets, your shoes, everything … it was a nuisance if I can use that word. But that nuisance turned into love over a period of time, just because of the admiration they had for you, as big brothers, big sisters.”

Jordan joked about Bryant peppering him with questions about everything from his jump to the triangle offense and the trials and tribulations about being an NBA star as his career with Los Angeles blossomed. “The questions, the wanting to know every little detail about life they were about to embark on … he used to call me, text me, 11:30, 2:30, 3:30 in the morning, talking about post-up moves, footwork, and sometimes, the triangle [offense]. At first, it was an aggravation,” Jordan said. “But then it turned into a certain passion.

This kid had a passion like you would never know. … What Kobe Bryant was for me was the inspiration that someone truly cared about the way I played the game or the way that he wanted to play the game. He wanted to be the best basketball player that he could be, and, as I got to know him, I wanted to be the best big brother that I could be.”He joked once more about how, even in loss, Bryant would get to him, turning his tearful speech into another “Crying Jordan” meme for another three or four years.

“I told my wife I wasn’t going to do this because I didn’t want to see that for the next three or four years,” Jordan said. “That is what Kobe Bryant does to me. He knows how to get to you in a way that affects you personally, even if he’s being a pain in the a*s. He can bring out the best in you, and he did that for me.” He recalled one time when he was visiting the Lakers and then-head coach Phil Jackson. He said Bryant asked him, “Did you bring your shoes?” Jordan replied he was just visiting, but Bryant’s competitive never burned out. As he left the stage, Jordan said to “rest in peace, little brother.”

This Article Was First Published on foxnews.com