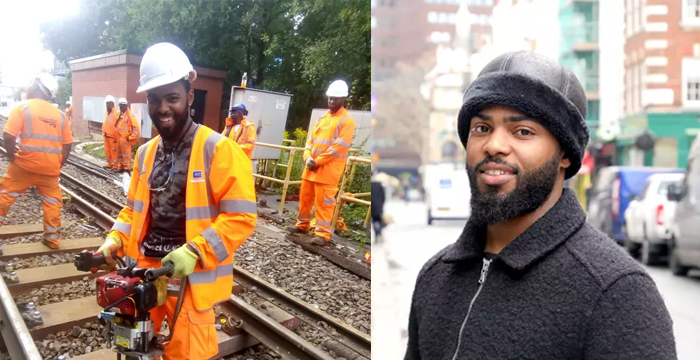 A man who used to be homeless is now on his way to achieving his dreams of becoming an aircraft engineer. Lawrence who lives in London used to sleep at the airport where he worked because he had no home. In a report by LAD Bible, Lawrence shared that growing up, he had a difficult time at school and he had no to him motivated in life. “Growing up, I had a lack of role models in my life – my dad was largely absent,” Lawrence said.

“School for me was a tricky time. Again, not having a dad around me to support me and a lack of stable upbringing affected me. I spent a lot of my education feeling frustrated and unfocused,” he added. He mentioned that even when he was still a kid, he already had a dream of becoming an aircraft engineer. “I left school with big dreams and ambitions to be an aircraft engineer, which started when I was a kid when I went to air shows. But without the means to get there, I ended up doing odd jobs just to bring money in,” Lawrence said.

He shared that he struggled because he kept on jumping to different places to crash in and find something stable to survive. “For me, the problem wasn’t with getting work, it was more an issue with finding something stable. I ended up becoming a cleaner at an airport, but the job was more focused on survival and getting by, rather than doing something I really enjoyed,” Lawrence explained. “The whole experience ended up being really stressful.

My income wasn’t consistent, and I didn’t have a fixed address at the time as I was sofa surfing. Sometimes I was even sleeping at the airport where I worked – just so I could get to work on time,” he added. Fortunately, he came across Beam, an organization that crowdfunds training for homeless people.

“I was able to crowdfund £4,449 from 228 members of the public so that I could train as a railway engineer,” Lawrence shared. “This is a great stepping stone and will give me the experience I need to eventually become an aircraft engineer – which is still the dream,” he continued. Lawrence had enough money to complete Level 3 qualification in Railway Engineering Track Maintenance. Right now, Lawrence is determined to do better in life with his children as his inspiration.

He is now focused on getting back and standing on his own. “My children are the main reason I am so focused on getting myself back on my own two feet. They are why I am training, so I can get work and better myself,” he said. “Now that I’ve landed a job on the railway tracks, things have really started to turn around and I’m renting my own place. Sometimes all it takes is someone to give you a leg up and believe in you,” he added.

Theresa Tate Kirk: “Congratulations young man, So proud of u. Never give up”

Carolyn Carter: “SOO HAPPY FOR YOU”

Distefano 213: “Poor old ginger his a hard working legend but can’t afford a ride on the A380 poor thing he was tearing up.”

Hypnotic: “Having passengers check in their own bags is a huge mistake. People still get confused at a grocery store self check out.”

Ashlynn V: “Bless the people who clean the chairs and have jobs like that, they go so unseen but the airport wouldn’t run properly without them respect”

JustVisiting: “Don’t know why people get upset. We all have a job to do… Well, I say let’s get one more. Now, sir, that last part was not just a job to do, it sure sounded more like”

pleasure.CLAMK: “Petition for Ginger to have a first class flight on an A380- anyone who works that hard and is loyal for that long deserves to have a great experience in the plane he looks after every day.”

You can also check here for video

This article was originally published on the kami.com