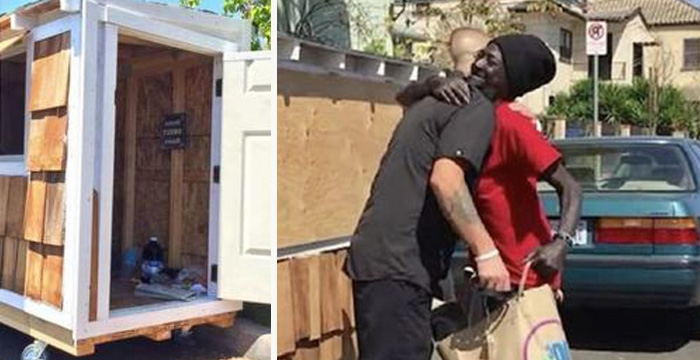 Elvis Summers became accustomed to letting the homeless woman on his block, ‘Smokie,’ go through his recycling. She would stop by his Los Angeles apartment often and the two would talk. Summers – who runs a company that supplies dancers for parties – said he wished he could further help out Smokie, a mother who is 60-years-old and sleeps in a patch of dirt. That’s when he heard of a a man in Oakland who had built miniature houses out of discarded materials – Summers and decided he could do the same for Smokie.

So Summers got to work. He rearranged some of his finances and started buying the necessary materials. Summers did not have anywhere to actually construct the home, so just started doing it on the street. After five days, and about $500, the miniature house was complete. Smokie, who has been living on the streets for 10 years, was then given the keys. It’s the first time she’s had a proper roof over her head in decade.

The whole process was filmed, with a video uploaded to YouTube quickly going viral. Summers was smart enough to build the shelter on wheels so it can be easily moved around. ‘The local LAPD cops have been super cool, and have told me they support it – as long as we move it to a different spot every 72 hours,’ he told The Good News Network. Summers added that the way people today perceive homelessness is wrong and antiquated.

‘Being homeless is not a offence,’ Summers said. ‘The true offence is how we as human being look at and treat people that are homeless. ‘Some people don’t, but most homeless people want help and are desperate to get off the streets. ‘Many to most are losing hope or have already lost it and are simply loosing, homeless and hungry.’

Due to the way Summer’s story has spread, he has been inundated with people asking whether he would be able to build them a place to live as well. He has subsequently started up a Go Fund Me page and is trying to gather money together in order to help out other people.

‘This “Welcome Home: A Tiny House, Huge Purpose” project is to build tiny house’s for homeless Woman, Men, Children, US Veterans and Families who are homeless,’ Summers wrote online. ‘Human Beings, not “bums or trash” who need a little humanity, a little help to get off the streets.’ The page had already gathered over $7,400 as of Wednesday night. The aim is for $50,000 which, based on how much Summers spent on building the house for Smokie, would build 100 shelters.

padma salam – This is an inspiring story! I hope people will donate towards your cause!!!!!!!!!! Cheers and beers mates!

Alison – I think a good idea would be to buy a massive spot of land to put all the houses. It would make it so that the homeless could live in a community.

Eric – i say you should make a deal w/ them: we give you a tiny house of your own and you in turn help build more for other poor people and they do the same and so on ….it’s a win win as it get’s people off the streets and teaches them a skill

Thomas – Idk where you live but I would love to help you make these for the homeless, my goal in life is to give back 10xs over. Videos like this seeing people like you do what you do gives me hope for this world