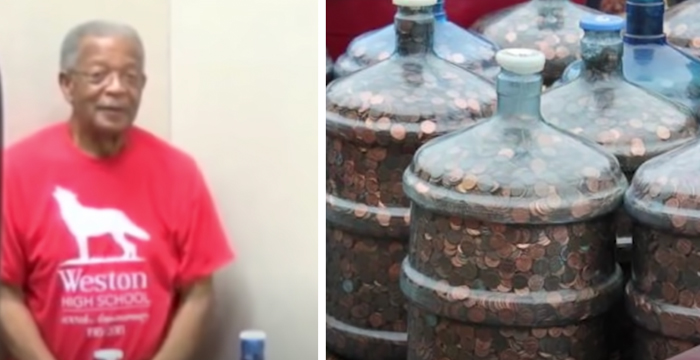 Otha Anders is a true believer in the phrase “a pretty penny.” For 45 years, up until Tuesday, he was the proud owner of a collection containing over half a million of them. The Louisiana teacher loved looking at his massive collection so much that in the 70s, when the U.S. government began to offer a $25 bonus for every $100 worth of pennies turned in, he wasn’t even a little tempted to take the extra cash.

To Anders, 73, the pennies represent more than a nice pay day. They remind him to stay thankful, he says. “If I would see a penny when I’m gassing up, on the ground, or in a store, it would be a reminder to stop right there and say a prayer,” he said. “I never failed to do that. That’s why they had so much value to me.” If his homeowner’s insurance policy hadn’t stopped covering the pennies, Anders says there would’ve been no turning back. “I wanted to fill five five-gallon water jugs. That was the goal, but I couldn’t stop. … If I hadn’t turned them in yesterday, I was not going to stop.”

As it was, the $5,136 worth of pennies took five hours for Origin Bank in Ruston, Louisiana, to count and process. Anders got in touch with the bank about a week ago to let them know he was bringing in a large amount of pennies, but senior vice president Ryan Kilpatrick told ABC News that nothing really prepares you for seeing fifteen 5-gallon jugs of copper rolled into your bank. “It’s shocking, for sure,” he said. “I would say he’s done a lot of collecting over the years.”

It’s unclear how much his collection weighed, but using the U.S. Mint’s estimate of 2.5 grams a coin, it might have been around 2,800 pounds. Even over 45 years, it’s hard to acquire a collection of over 500,000 pennies without a little help. But Anders says that he would never accept a penny from anyone, even his family, without giving them something in return. He plans to put the money toward a recent dental bill, but he says he hasn’t lost the joy that comes with collecting coins.

Joseph Fonseca – I’m going to start saving my pennies from now on & every New Year I’m going to cash them in & donate it to a different charity for children!

Baltimore Colt – I had $100 in pennies when I was 21. I cashed them in and bought my girlfriend something for Christmas. About ten years later, my girlfriend (now my wife) and I had a house and a kid on the way. We needed money. I cashed in over $3,500 in pennies.

Peggy Pirtle – Coin collectors sure would have loved going through his pennies searching for specific dates, years, errors, and wheat pennies, etc. can you imagine it’s very possible he had very valuable pennies worth much more than the total worth

This Article Was First Published on abcnews.go.com