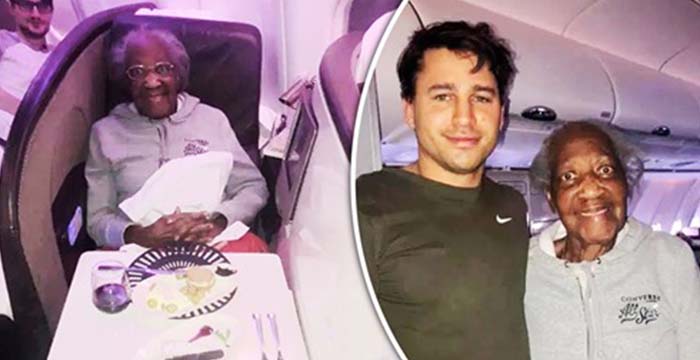 Of all the ways people can travel places, planes are probably the most anxiety-inducing. Yes, I know, they are statistically the safest mode of transport, but it doesn’t help when turbulence hits and you’re miles above the ground. That’s why airlines are always coming out with a more comfortable way to travel by offering things like first, business, or even luxury class comfort. It comes at a price, though, with some airlines charging upwards of 2,000–3,000 dollars for an upper class ticket.

Well, money and comfort was never an issue for this young man on a Virgin Atlantic flight from New York to London…

Jack, a New York-London flight passenger, offered to swap his 1st class seat with 88YO Violet from economy

Leah Amy, a flight attendant on the Virgin Atlantic flight from New York, USA to London, UK, shared a heartwarming post about her “two favorite passengers ever”. Of all the people she met over the hundreds of flights that she’s been on—including footballers, supermodels, and movie stars—she picked out two who melted her heart: a young man named Jack and an elderly woman named Violet.

Apparently, Jack was traveling home from New York with his family. He bought upper class cabin seats for the flight. However, when he got on board, instead of taking his first class seat, he went down to the end of the plane to fetch Violet in economy and sit her down in his seat in the front of the plane.

In an interview with Bored Panda, Eglė Jasonaitė, a cabin crew member at a major Middle East airline, explained that such stories happen every once in a while: “In one of the flights I was operating, a passenger flying economy had recently had surgery done on their leg and a man from business class offered his seat. It happens, though not often.”

Afterwards, Jack went down to economy class again—right where the toilets are—and he sat in Violet’s seat. Amy explained that for the whole flight he sat there without asking for anything or causing a commotion: “no fuss, no attention, literally did it out of the kindness of his own heart.” 88-year-old Violet, a former nurse, was traveling home after visiting her daughter in New York. This was her first trip after a while as she had knee replacement surgery prior to this.

Jack had made friends with Violet at the airport before boarding the flight. He found out that she had never flown in the front of the plane and it was her dream of experiencing that one day. So, it was a no-brainer for Jack to make this dream come true, especially considering her seniority and prior medical condition. In her post, Amy explained how excited Violet was to fly in upper class: “You should of seen her face, when I tucked her in her bed after supper. She said her daughter won’t believe her, and wanted a ‘selfie’ to prove it.”

One of the main aims of every flight attendant is to make passengers as comfortable as possible. “One time, I was working on a flight to Phuket, Thailand. During boarding, one of my colleagues noticed a lady who was seemingly anxious,” Jasonaitė told Bored Panda. “She was trying to say something but my colleague couldn’t understand the language she spoke since the passenger didn’t speak English at all. I came to help her out, asked if any passengers around are traveling with her or maybe she is traveling with a tour group. It appears she was traveling alone.”

“Then I tried to speak with her to recognize her language,” continued Jasonaitė. “Apparently, she was speaking Turkish and since I’ve done an Erasmus exchange there, I could understand some words. She was trying to contact her son who will be picking her up after she lands in Phuket to say that she’s on the plane, but her phone was not working. So, I put her son’s phone number into my phone and gave it to her. After the call, she felt more relaxed and reassured that someone will be waiting for her when she lands at her destination.”

Jasonaitė continued that there is also a myriad of small ways that the flight crew can help passengers feel more at ease during their journey: “A lot of passengers are terrified of flying, so it is usually enough to approach them during the flight to talk to them and to ask them how they’re feeling. As for people with some sort of medical issues, we simply ask someone to switch seats with them, if that is a possibility so that they could have more space.”

“Such situations, however, are a common occurrence—perhaps not necessarily always ending in a reseating to a higher-tier class. We can’t do that, at least in our airlines,” continued Jasonaitė. “However, surprisingly, there are a lot of cases where people fly for reasons other than a vacation.

A woman and her son were flying from Dusseldorf back to Auckland and I asked them whether they had been visiting their family as I have seen them standing near the galley and overheard that the woman’s mother has recently died. In these situations, we tend to talk to them, provide comfort as much as we can. Many things of such caliber are simply in our job description, so it’s like second nature by this point.”

Heidi Lowe Frix: “I’ve been blessed by a few random acts of kindness over the years but I’ll list this one due to the season. Almost 20 years ago on Christmas eve I was super poor, young (18), and had a not quite 2 week old baby. I had walked up to the mall to meet my then boyfriend (father of said baby) and we wound up arguing. A random guy (I could see his wife and kids waiting a few feet away) walked up to me and gave me a $100 bill. He said “I remember how rough it is when you’re just starting out, I hope this helps”. I never got his name, and have sadly forgotten his face, but I never forgot him. So if you’re reading this, random wonderful man from Tyrone mall in 1999, I remember your kindness and have done my best to pay it forward”

Sarah Spillane: “When I was travelling from LA to New Zealand with my 18 month old son (a 12 hour flight) I was given a seat in the middle of three seats with toddler on my knee on a full flight. I could have cried travelling for 12 hours with a wriggly toddler and in between strangers was just so awful. About 10 minutes after the plane took off a stranger came over a tapped me on the shoulder. His English wasn’t too good so it took me a minute to understand he was pointing to his own seat, aisle seat with the only empty seat on the plane beside it and insisting that my son and I take it. He gave up his aisle seat and empty seat beside it to a complete stranger and took my, middle of three seats, just to be kind. This was 17 years ago and to this day I think it is the single kindest thing a stranger has ever done for me.”

Kamontip Taylor: “Couple months ago I had to work on Saturday morning and while I run to the bus stop, start notice queue up at the front of me by the time I get there I see a Japanese tourist (young girl in her early 20) at the front holding a £50 banknote and I was thinking no way the driver will have change for that , once I get in worry she might miss this bus I told the driver I’ll pay for her fare where ever she want to stop but realised this is tourist route she might want multiple stop as the bus offer day ride so I pay extra couple quid for her , she was so ever grateful I told her she can use this ticket for whole day multiple stop , once the bus stop at the famous area where I live I can see she get off , and looking for me ( I goes upper decker bus) but didn’t see me ,it not much I know but see how happy in her eyes it just make your heart fluffy”

This article was originally published on the boredpanda.com