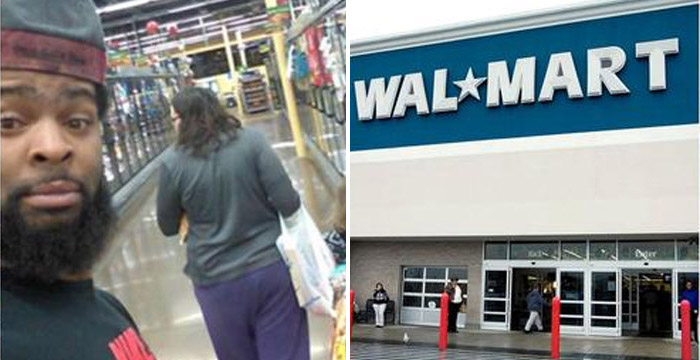 A man has received praise online after he bought groceries for a struggling mom and her daughter. According to TiffyTaffy, Bear Taliferro Jr. overheard a sad conversation between the mother and her child while he was shopping at Walmart. “Last night, I left from pulling 2 fourteen-hour shifts,” Bear wrote in a post on Social media. “Stopped by the grocery store to grab food for dinner and as I was checking out a woman started crying in the next checkout line.”

He overheard the girl ask her mom what was wrong, and saw that the mother was crying in the lane next to him. “Her daughter asked her what’s wrong and she said, ‘We can’t afford to eat tonight.’” Another person also overheard and gave them a few dollars towards their groceries. Bear then walked over and told them he would pay for their food and to get whatever they want.

“A person behind her gave her a couple of dollars and she bought her daughter a Kids Cuisine TV dinner. I told her to grab what she wants, I’ll pay for it.” Bear later mentioned he never shops at the store and thinks his reason for being there was down to divine timing… “I NEVER stop at this Walmart. I’m simply saying GOD puts you where he needs you to be WHEN he needs you to be there” Thousands of people have praised Bear for his selfless actions… “It’s very thoughtful. I was in [a similar] situation when I didn’t have the right date wic checks to get my baby her formula, so I was going leave it [and] come back the next day with the right date checks, and this lady behind me decided to pay for all of the cans of baby milk I had at the register.

I asked for her number and address to give her her money back, and she said not to worry about it; it’s her gift. This was 10 years ago, so I always try to be a good person to others when I can,” one commented. “That’s my lil Brother doing what mom’s told us to do when women and children are in need, we help them out with whatever they need. GOD put you in the right place last night. Thanks for helping a woman and her children with the food they need to eat so they don’t go hungry. GOD’S got you,” wrote another. “My wife and I were in Winn Dixie about A month ago and a woman in front of us didn’t have enough money for sandwich meat and mustard so my wife said ‘hey I got it, put it on our tab’ and I was shocked when this woman just broke down, I mean crying like crazy!! I don’t know what her story was but I could see that she was in a bad way! You never know, the littlest thing may mean the world to someone else!!” shared a third.

According to data released by the Census Bureau, one in four Americans experienced food insecurity – meaning that they can’t afford to eat – over the last year. This problem is even worse in non-white communities and so many families have to go hungry in order to make ends meet.It just goes to show how a small, kind gesture such as Bear’s can truly make a stranger’s day!

Steph Clapson – It’s lovely that he did this. But I don’t see why he had to brag about it on social media. People should be kind for kindness sake, not for praise or attention.

Barbara Cooker – Very nice guy, but isn’t it a little weird that you would go shopping if you couldn’t afford to eat?

Matt Newton – Hmmmmmm, sorry but I know this scheme and can’t help but wonder if it wasn’t a trick. Had a similar one tried on me a couple of weeks ago.

This Article Was First Published on twentytwowords.com