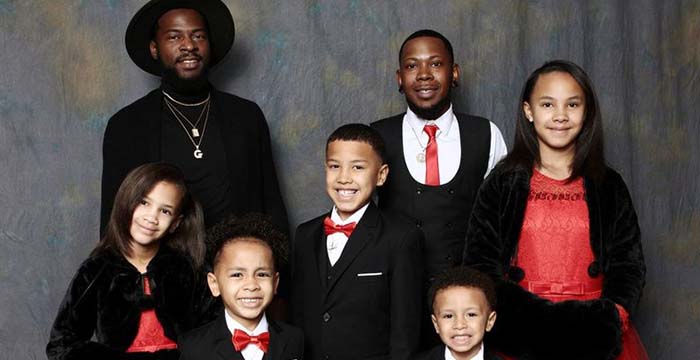 A 29-year-old single man has adopted five children from the same family because he did not want them to be separated. Robert Carter, from Ohio, was just 12-years-old when he was placed in a foster home and split from his eight siblings. After realising the emotional trauma that it caused him, Carter decided to become a foster parent himself. When he began fostering three brothers in December 2018, Carter was told the siblings had been separated from their two sisters.

He promptly contacted the girls’ foster parents and set up a play date so the siblings could be reunited. “The kids saw each other and started hugging and crying and wouldn’t let go. That was the moment I said ‘okay I’m going to take all five’,” he said. “I know the pain of being separated too well and I could not let that happen to them.” After successfully bringing them together, Carter took things a step further by adopting all five children as his own, ensuring that they will never be separated from one another again.

Now, he is the father of 10-year-old Marionna, Robert Jr., nine, Makayla, eight, Giovanni, five, and Kiontae, four, after he adopted them on 30 October.
Carter said that some people expressed concern that he was too young or that he would find bringing up five children difficult. But he insists that he is enjoying every moment of it. “A lot of people think it’s hard if you’re by yourself or don’t have a house, but it’s a lot easier than people think it’s going to be and kids need parents whether it’s two or one,” he said, adding that he was nervous something could go wrong right up until the adoption was complete.

“After it was finalised, I just cried because it was over and I didn’t have to worry about if they were going to be moved or would have to suffer anymore,” he explained. “I woke up the next day feeling relieved, at peace and blessed to have these kids.” The Carter family is now looking to buy a home and a GoFundMe has been set up to help them raise funds. At time of writing, more than $74,000 (£56,347) of the $150,000 (£114,217) goal has been reached.

Robert said he’s been overwhelmed by the support people have shown. “I can’t even explain how unbelievable it is, just to have support and people sharing our story to bring awareness to the fact that we still have so many kids that need homes,” he said. “I’m just happy that I’m able to help encourage people to step up as foster and adoptive parents so we can get these kids into great hands.”

Katie Holt: “This man is incredible what a beautiful thing to do. I have always wanted children but never found that special someone to have any with i would love to adopt but I couldn’t due to having to work full time to pay the bills and my job is night work so it would be impossible to do on my own. Children are all Iv ever wanted in life it breaks me knowing I will never have them if I had the support and financial help I would adopt in a heartbeat x x x”

Wayne W Freeman: “The right way to do things, but surprising they’d allow a single father to adopt children especially 5 of tem, not common, but an awesome gesture, of the heart for sure.”

Annette Duncan: “Its has to be wonderful for him and the children, I adopted two boys , myself 15 years ago, but to take a whole family, of 5 , he must have a heart of gold bless him”

David Douston: “What a wonderful man for adopting 5 children from the same family. I pray that God Blesses the whole family with lots of love and good health. I hope you all have a great time growing together.

This article was originally published on the independent.co.uk