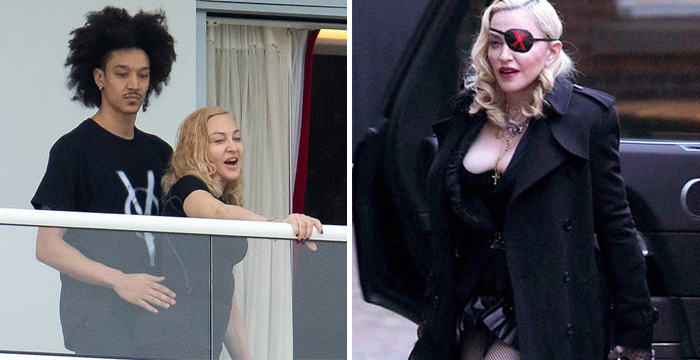 Madonna has already said that she loves her toyboy boyfriend Ahlamalik Williams, according to his father Drue. The proud father, 59, told TMZ he’s met the American songstress, 61, after she started dating the dancer, 25, and their relationship is already getting serious. Drue also insisted that he has no qualms with his son’s girlfriend despite their 36-year age gap, after previously hinting that they’ve been secretly dating for a year.

Drue revealed that Madonna and her beau Ahlamalik have already said they love each other, and the songstress even welcomed him and his wife Laurie, 55, for dinner after one of her shows at Caesars Palace. Insisting it doesn’t bother him that Madonna is actually older than him, he added: ‘Love has no age. My son is livin’ la Vida Loca, and I’m just happy for him.’ Ahlamalik’s father also revealed that Madonna has invited him and his wife to watch her shows in London and France in 2020.

The dancer’s parents first spoke about his romance with Madonna last week, as they hinted the couple were already planning a future together and have actually been dating for a year. They told The Mirror they even believe their son could marry the Like A Prayer hitmaker, despite the vast age gap. Drue said: ‘Madonna went on and on about how much she cares about our son. She said he’s intelligent and very talented. ‘She told us she is so much in love with him and that we didn’t have anything to worry about as she was going to take care of him.

Drue also noted that Madonna is actually two years older than him, but he isn’t concerned about the age gap. He added: ‘I think they have been dating for a year and got serious at the start of this latest tour, the Madame X tour.’ Drue also said that he and Laurie believe Ahlamalik has been dating Madonna for a year, though rumours of their relationship only surfaced in June 2018. The couple first met the hitmaker in September, and they say that their son has even met her six children.

Madonna first appeared to confirm her romance with Ahlamalik last week when the couple were spotted getting cosy on a balcony in Miami. The National Enquirer reported back in late October that the singer got serious with her new man in August but her friends are ‘worried’ about her as she keeps dating men much younger than she is. ‘She won’t even look at a guy who’s approaching half her age!’ a source said.

‘Her friends think she needs to start focusing on older guys if she ever wants to find an enduring relationship! ‘It’s great she still has the ability to attract these kids, and she seems smitten for now — but you only have to look at Madonna’s dating history to fi-gure it’s got very little chance of lasting.’ Madonna’s previous objet d’amour, was Portuguese model Kevin Sampaio, 26, who is 33 years her junior. Mr Sampaio is said to have impressed Madonna by keeping their friendship quiet and earning her trust.

She liked how he did not ‘go running to the press’ after their first date, a source said. They had been linked from 2017 until recently and he’s a big name in the fashion world, working for the likes of Dolce & Gabbana, Versace and Armani. Kevin met Madonna when he appeared in her B I’m Madonna music video and the pair shared a very passionate kiss as she moved through a colourful doorway in a nightclub during the video. The American music superstar has a history of dating younger suitors – including dancers Brahim Zailbat, then 23, and Timor Steffens, then 26.

Jessica Gordon: “What man in his 60s could keep up with a woman who looks and lives like Madonna does today, a young man in his 20s has a better chance to keep up with her”

stringer 2295: “I remember her during the 1980s talking about ‘dirty old men’ sat on the front show of her concerts. Well now your a ‘dirty old woman madge’ as for the boyfriend. Grab the fame and holidays while it lasts because this old slapper will move on soon vile.”

Maria Khan: “When an old man dates a young gold digger/sugar baby, he’s shamed, this is a similar case too, but the same people here are trying to make them appear as a “serious and in love couple”

morning Glory: “It’s all about d money ..her future has been passed for so long.its time for her to relax n play with grandchildren. Madonna will shower him with $$$$ n that will b his plan for d future..Good luck maddy”

Kaneli Roman: “Always loved Madonna and she can do what she wants but this scenerio looks a little odd. Think she’s in denial about getting older and trying to relive her past by feeding off some some youngggg stuff!”

This article was originally published on the dailymail.co.uk