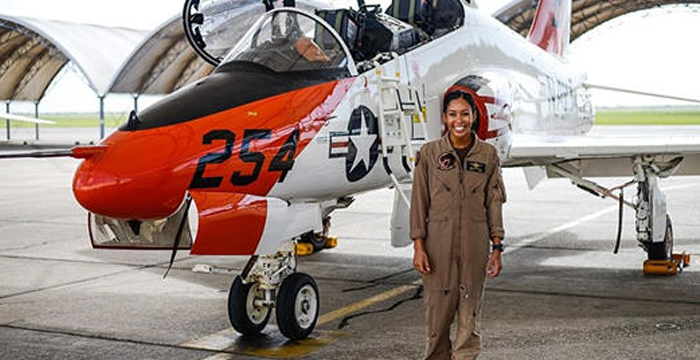 The first black female US Naval officer to become a tactical jet pilot since naval aviation began more than a century ago is set to receive the coveted ‘Wings of Gold’ insignia. Lt. j.g. Madeline Swegle, who broke through the glass ceiling earlier this month when she completed her training at naval flight school, is to receive her wings during a ceremony on Friday. ‘I am really honored that I get to wear the wings and get to fly planes and call myself a pilot,’ said Swegle in a Navy video released ahead of a ceremony that was posted on YouTube.

‘I don’t think the goal in my life is to necessarily be the first at anything. That was never something that I set out to do, it was just something I was interested in and I found out later,’ she said. Swegle, who grew up inspired by the Blue Angels, is the Navy’s first known black female pilot since naval aviation began nearly 110 years go. ‘My parents raised me and they told me that I can be whatever I wanted to be,’ she said, as she recalled going as a child to see the elite Blue Angels, who are among the Navy’s most skilled pilots.

‘They were just so cool I loved them. I love fast planes,’ she said. Swegle recalled being taken aback by the challenge of her first three years of training, while still feeling up to the challenge. ‘It was crazy to be in such a higher performance aircraft,’ she said. ‘I was really excited on the takeoff, like feeling the exhilaration and getting thrown back in the seat a little bit.’ But the female pilot admits there were moments she had her doubts she would make it. ‘It took a lot of the aircraft to figure out how it was going to perform,’ she said.

‘Looking back it’s amazing to think about where I started and I had never been in an airplane before so, it’s just one step at a time. It’s really cool to think of all of the things that I’ve done now which I’d never thought that I’d be able to do.’ Matthew Maher, commanding officer of training, also appears in the YouTube video, noting Swegle’s milestone achievement. ‘To show up here at this level, you need to be a top performer and then you have to continue to perform while you’re here. These are the best pilots in the world that are trained here, the very best,’ said Maher.

‘She, just like all of her fellow Wingees, are at that standard of excellence and they’re going to go out and make all of us very proud.’ According to Stars and Stripes, Swegle is from Burke, Virginia, and graduated from the U.S. Naval Academy in 2017. Officials said she is assigned to the Redhawks of Training Squadron 21 in Kingsville, Texas.

Swegle’s milestone comes more than 45 years after Rosemary Mariner in 1974 became the first woman to fly a tactical jet and command an operational naval aviation squadron, reports ABC News . Brenda Robinson, who earned her ‘Wings of Gold’ in 1908, was the first Black American female graduate from the Navy’s Aviation Officer Candidate School.

Arizona Sen. Martha McSally was the first woman to fly in combat for any service while with the Air Force in 1995.Shawna Rochelle Kimbrell became the first black female pilot in the Air Force in 1999. Kara Hultgreen became the first female carrier-based pilot in 1994, as well as the first to depart in an aircraft crash later that year. But while women have served on US combat ships since 1994, the Navy has faced scrutiny for a lack of diversity among pilots.

Just under 2.7 per cent of pilots with the Navy maritime squadrons were Black in 2018, Military.com reports. Additionally, less than seven per cent of Navy pilots are female, Pensacola News Journal reports. It also comes two years after two Black male pilots claimed they were remove out of the tactical air program because of their race. This caused Vice Adm. DeWolfe Miller, the commander of Naval Air Forces, to call for reforms among the branch. On June 30, the Navy revealed it created a task force named ‘Task Force One Navy’ to combat discrimination, and their impact on naval readiness.’

‘As a Navy — uniform and civilian, active and reserve – we cannot tolerate discrimination or of any kind. We must work to identify and eliminate individual and systemic discrimination within our force,’ said Chief of Naval Operations, Adm. Mike Gilday in a statement. Sen. Kamala Harris of California congratulated Swegle earlier this month, tweeting: ‘You’re paving the way for young girls everywhere.’ Legendary tennis player Billie Jean King responded to the fantastic news by noting ‘Representation Matters’ and comedian D.L. Hughley wrote ‘Black Girl Magic.’

Scott Kelly, a former NASA astronaut and Navy captain, welcomed Swegle into the military family. ‘Welcome to the best flying organization on earth. Fly Navy, and fly safe!’ wrote Scott. Swegle’s achievement comes as the country has a renewed focus on inclusivity and equality amid Black Lives Matter protests over the loss of George F. Several companies, departments and institutions have made efforts to correct course.

In early June, ABC News put a top diversity executive on administrative leave over charges she made insensitive comments geared at several staffers, including Robin Roberts. One week later the Editor-in-Chief of Variety, Claudie Eller, took a two month leave after dismissing a minority reporter who called her out for a lack of diversity in the newsroom. The Black Lives Matter protests began in late May and have continued for nearly two months nationwide.

Margaret Windham – Thank you for your service!! I salute you, Madeline Swegle!! Congratulations on being the First and walking through that door!! Many will stand on your shoulders. You will not be the last!!

Jeffrey Bailey – Such Intelligence, Skills and Dedication are far to valuable to be ignored.The color of you outer body does not matter.It’s what is inside you that is important! Thank you Madeline for your great achievement and service!

Nancy Fitzpatrick – Thank you for your service. Congratulations on a job well done and also for being the first woman on that job. So proud of you

Joella Trull – Congratulations! Another woman for the girls in this Country to have as a role model. Thank you for your service and your example. I’m 73 and never thought I would see this. It’s wonderful.

Stephen Guilfoyle – I appreciate her service. But the Navy didn’t have pilots in 1910. First navy flight was 1911.Naval aviation was originally intended for scouting only. There was some talk about bombing ships and torpedoing ships. But is plane vs. plane. Possibly a concept during WW I. I am am glad she is first. It is certainly overdue. But she isn’t breaking a record and it isn’t 110 years old, whatever it is.