‘lord Of The Rings!’ Couple Goes Viral When Man Proposes With Five Different Engagement Rings And A Helicopter Ride – Video 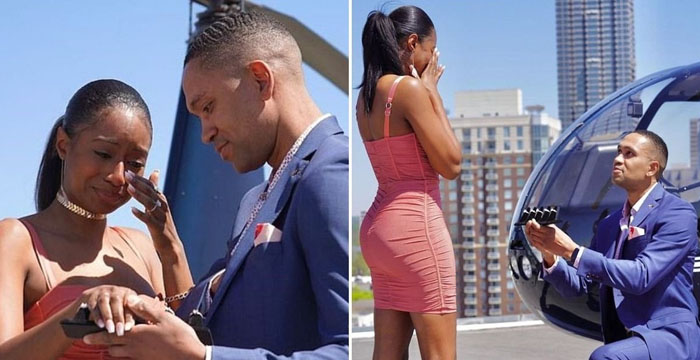 Many girls just want a rock, but Brittney Miller got five. Miller and her fiancé William Hunn’s engagement announcement went far beyond their circle of friends thanks to Hunn’s over-the-top proposal, which included showing his future bride five different ring options as he got down on one knee after a romantic helicopter ride and wine tasting. The Atlanta couple’s happy news went viral on Instagram, with thousands of likes since he posted photos and video created from the extravagant April 4 proposal reminiscent of “The Bachelor.”

“She Said Yes! Asked my best friend to spend the rest of our days together! & gave her 5 different options to choose from,” Hunn gushed in his caption. “I thought I knew what love was till you came into my life. Can’t wait to see all the blessings that God has in store for us!” Miller chose a rectangular-cut diamond ring out of the five finger ornaments, which she selected herself several weeks earlier when the pair went ring shopping together. However, she was dumbfounded when she was presented with all of her favorites during the proposal.

After the helicopter landed on a helipad, several of the couple’s friends, a photographer and a videographer were waiting in the wings to catch the couple’s special moment, which Miller said took her by surprise. “When I saw them come up to the rooftop, my heart just dropped all I could think was, ‘Oh my gosh, it’s about to happen, it’s about to happen,’ ” she told. “If he had just had our family come from out of state to meet for the first time, and surprised me with one ring, I would have been just as happy. But he wanted to make it very very unique and special, and he did that.”

Miller and Hunn celebrated their happy news afterward with a surprise engagement bash with family members. The two, who met about a decade earlier at Clark Atlanta University and became friends, had been dating for a little less than a year, but Miller believes “you can’t put a time on love.” While time wasn’t a concern for the proposal, Miller told that the couple plans to wait a year before walking down the aisle.

The proposal heard around the world even caught the eye of “CBS This Morning” anchorwoman Gayle King, who shared the engagement story on a recent episode of her talk show. “He gave his fiancée not one, not two, not three, not four, but five choices of engagement rings and allowed her to choose,” the 66-year-old Meghan Markle bestie said. “It was very creative,” King added. “And the fact that he cared that much. To me, it sounds like that marriage is off to a very good start.”

Amanda Ventura – I think proposals are a very personal and sentimental thing. Is it really anyone else’s business? We aren’t really privy to their relationship, and maybe it was the perfect way for them. Every couple is unique, and I always love a sentimental, unique proposal. I wish them much happiness.

Jessica Tearney – What a lucky lady. It would be nice just to get proposed to. I’m still waiting and probably will until the end of my days.

Eleshia Lusane – “If he had just had our family come from out of state to meet for the first time, and surprised me with one ring, I would have been just as happy,” Miller said. “But he wanted to make it very very unique and special, and he did that.”

Sally Stephen – It’s about being creative ! Good for you if you knew what your lady wanted . His had options 5 of them ! Congratulations to the newly engaged couple.

This Article Was First Published on nypost.com