LNHH’s Apple Watts Left In Tears After Discovering Boyfriend Is A Trans gender Man Who Used To Be A Woman, Now She’s Paying Money To Anyone Who Can Locate His Old TikTok Account – Video 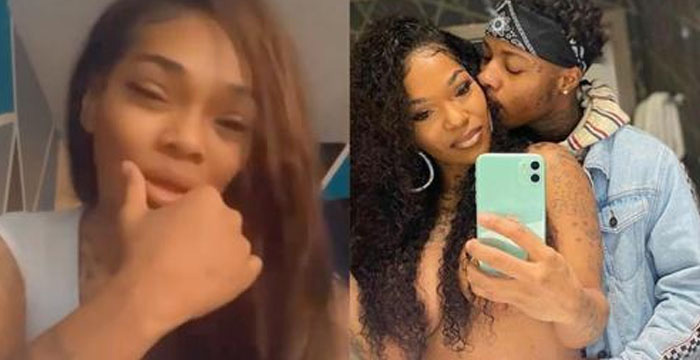 Apple Watts is famous for being on Love and Hip Hop: Hollywood, but perhaps she should get in touch with Nev Schulman, as she may be a great contender for an episode of MTV’s Catfish. The reality star shared to her social media followers recently that the person that she’s been recently dating, she may not have known all too well. While Apple has been a supporting cast member on the LHHH franchise, not much has been said of her romantic life on (or off of) the show. The mother of three children (one through a sp- erm donor, as told to VH1.com saying “I was gay at the time”), has reportedly been married once, but no information has been given on him.

Speaking with VH1 in a 2018 interview, Watts claimed at the time there was no special man, or woman, in her life. “No more women! I haven’t been down that road since my son five years ago,” stated Apple. “I need to find a man. Every man I’ve ever had in my life has broken my heart. I need a backbone, but it’s hard to find the right one because these men are so crazy. I would love to do a spin-off called ‘Bite the Apple’ where I can get to know someone. It’s difficult being a st-ripper, but now that I’m on TV I don’t know who is real or fake. Now I have to deal with all of that at one time. So I’m just looking for love.”

Recently it was announced that rapper Sage The Gemini and entrepreneur Supa Cent were romantically linked. The news of this set Apple Watts ablaze, taking to Instagram in a Live to get on the rapper. “You in love? So, now you in love,” she claims in the clip shared by TheShadeRoom before stating that he loves to hop on bandwagons and praises his bedroom skills. Later she came back to apologize for her previous rant. “I’m going to be honest. I’m very humble,” she began. “Last night I didn’t even know how the I got on the subject about him. At the end of the day, I’m proud of Sage. I hope he and Supa last long. I love to see my Black Kings and Black Queens.

I’m not angry; I’m mad about none of that I’m not an Internet gangsta. I’m a street b—h first, so y’all need to know that. I don’t do this internet stuff. ‘Love, and Hip Hop’ don’t move me. I’m a gan-gster from the street, first off. I don’t even know what came about for me even to bring up his name. I’m happy for them both. Supa is a beautiful woman. I said what I said, and it is what it is.” Watts’s unlucky streak in love has continued it seems, as her latest love interest happened to be an unexpected surprise for her. Apple exposed to her social followers that her “boyfriend” happened to actually be a transgender man. Angered about her revelation, she posted a photo on social media and offered a sum of money to anyone who could locate the TikTok account of her ex.

“Yo this whole time if you haven’t heard the story I thought this was a Man which was my [man] but it was a woman the whole time. I got $6000 for he/she TikTok cuz he lie and played me I want his TikTok,” Watts wrote. She later deleted her post, but offered a video explanation afterward on her odd situation. “I erased the because God will not allow hate in my heart,” she explained. “And I don’t want no bad karma to me because 2021 been so good. My eyes is puffy because I’ve been crying. Yeah, I’m hurt because I don’t let people in. I’ve [been] f—-d over by men so many times. And then when I thought it was a [man] it was really a b—h and I allowed that …we was even talking about marriage.”

She continued, “So let me tell you, either way, my heart got broken, I’m used to that…I done cried and sucked it up. But crying is not gonna allow hate in my heart so he can say what he wanna say or he/she could say about me but everybody done talked about me. It don’t even move me. But God bless you. Getcha life. Period. Please getcha life because God treat me so well. I’m sorry, you’re not gonna get fame off of me and I’m still gonna catch you.”

A post shared by The Neighborhood Talk, LLC (@theneighborhoodtalk)

Darek – How they have s-x. U didnt look down or feel anything different

baddie__keya – @s3nzai.ebony_ no im not gonna hush. She wanted to disrespect someones pronouns so i dont have to respect her. You need to humble yourself because you think its cook disrespecting people. You and her need to learn how to respect people. I was raised to respect people unlike yall. This conversation happened 5 days ago. Move on transphobe.