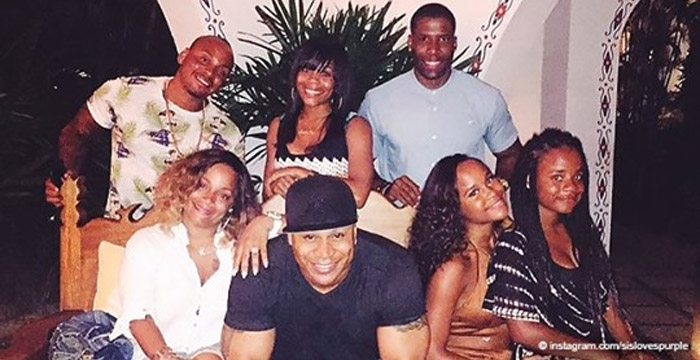 American rapper and actor LL Cool J’s wife, Simone Smith, takes to social media to share a picture of their family throwback in what she tags their “Happy Place.” Renowned American rapper LL Cool J and his wife, Simone Smith, are married for over 23 years. Recently Simone took to her Instagram page to share her family’s throwback video.The long standing relationship between LL Cool J and Simone has raised the standard for couple goals as they are now commonly referred to as “marriage veterans.”

Cool J and Simone met in 1987 when they were just teenagers. The meeting was initially planned by the couple’s friend who thought he would hit it off. The two lovebirds later tied the knot in 1995 and they would go on to have four children together.

It was not all smooth sailing for them, as they face to face several highs and lows during their relationship’s early years.

Nine years after their 1995 wedding ceremony, Simone has reportedly discovered a lump on her leg a symptom associated with bone leukemia by her doctors.

Earlier, she was diagnosed with untreatable bone sickness in stage III.

Cool J remained by her side in the months that followed, offering her much needed support as she battled for her life an experience she claims drew them closer to each other.

You’re not leaving someone in that foxhole, you realize, the singer said during an Oprah chat.

He continued, going on, that the circumstance forced him to make some sacrifices about his job so that he could be with his child.

Although Cool J and his wife have established a healthy relationship since their engagement, they often don’t see all issues eye to eye.

Throughout her conversation with the talk show host Oprah Winfrey, Simone opened up on one such incident.