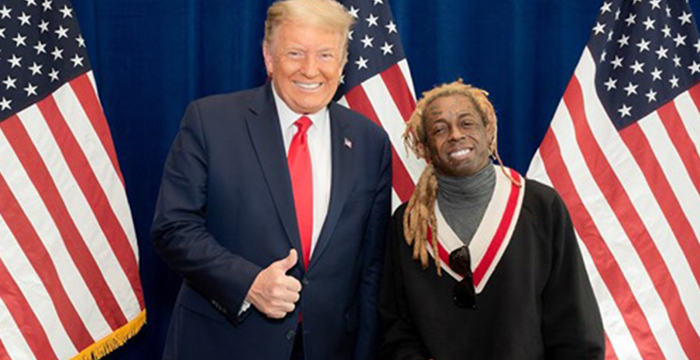 Lil Wayne is expressing support for Donald Trump. The rapper, 38, shared a photo with Trump, 74, on Twitter Thursday, saying that they had a “great meeting.” Lil Wayne (né Dwayne Michael Carter Jr.) also praised the president’s Platinum Plan, which was unveiled earlier this month. “Just had a great meeting with realdonaldtrump potus besides what he’s done so far with reform, the platinum plan is going to give the community real ownership,” Lil Wayne said in his tweet.

“He listened to what we had to say today and assured he will and can get it done.” While Trump didn’t say anything about the meeting on his own Twitter, he did retweet Lil Wayne’s post. Yahoo News White House Correspondent Hunter Walker reported that the Trump campaign sent a text message blast out to Black supporters about the meeting.

Just had a great meeting with @realdonaldtrump @potus besides what he’s done so far with criminal reform, the platinum plan is going to give the community real ownership. He listened to what we had to say today and assured he will and can get it done. ?? pic.twitter.com/Q9c5k1yMWf

The Platinum Plan, which is a proposal that the Trump administration revealed earlier this month, lists “pillars” of “opportunity, security, prosperity, fairness,” and promises to provide jobs and support for Black-owned businesses. The proposed plan comes after Trump has disparaged the Black Lives Matter movement, calling it a “symbol of hate.”

In addition to promising to “increase access to capital in black communities by almost $500 billion” over the next four years, the plan includes a proposal to make Juneteenth a national holiday. Trump controversially scheduled a rally in Tulsa, Oklahoma, on June 19 this year, later claiming that the action made the date famous. The rally ended up being rescheduled for the following day.

“I did something good: I made Juneteenth very famous,” he said in an interview with the Wall Street Journal. “It’s actually an important event, an important time. But nobody had ever heard of it.” Lil Wayne’s public support of Trump was met with mixed reactions online. “Grateful to see this. This is about helping people. End of story,” one Twitter user wrote. But many of the reactions were far from positive.

Comedian Sarah Cooper wrote, “‘He assured me we will get it done’ My god how dumb are you.” Amid the protests against officer over the summer, Lil Wayne expressed support for law enforcement, citing an incident when he was 12 and “saved by a white cop.”

Takisha Brown: “I knew he was losing it when I noticed he was still rocking dreads and only has 3 left.”

Kristina Vasquez-Peterson: “Here come all the supporters praising him who, in their last breath, said celebrities should “stay out of politics” or “we don’t care what celebrities think!” Which translates to: Unless they think like us.”

Cecilia Branco-Cavadas: “Lil Wayne definitely put his money to good use! NOT!! It’s all about him. Can’t wait to see his next investment. Trump will be his marketing genius! As happy he is about this endorsement, he will do wonders repairing that demographic.”

Alegri Menyette: “Birds of a feather flock together. I’m glad I never supported him or his music.”

Mecca Mecca: “He doesn’t even know who lil Wayne is. They just told him to stand there and smile and he did it.”

Christopher Davis: “That’s cool that some celebrities have a open mind and willing to work with our president to bring solutions to the black community.”

This article was originally published on the people.com, vibe.com