‘Leave My Wife Out The Jokes’: 50 Cent Disrespects Lil Kim’s Latest Face & Receives A Visit From Her Husband, Mr. – Video 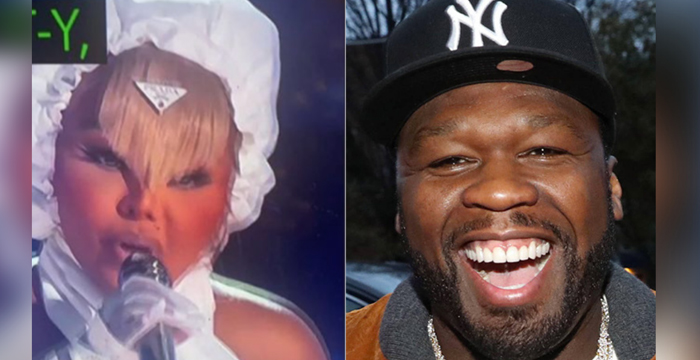 Are they together? Are they separated? Where do they stand? Lil’ Kim and her on-again-off-again man, Mr. Papers, have kept that question swirling in the minds of her fans. However, no matter what status their relationship is in, one thing’s for sure and two things are for certain: Mr. Papers does not play about Kimberly Denise Jones, aka Lil’ Kim the “Queen Bee”. Back in 2012, pictures began to surface with Lil’ Kim and a man that blogs were speculating to be her “new boo”, who was later discovered to be rapper Mr. Papers. She would then later confirm their relationship with a tweet that captured a picture of the both of them during rehearsals for her “Return of The Queen” tour.

The relationship would enter the on-and-off cycle for years to follow. But a blessing would come in the form of a baby girl named Royal Reign in June of 2014. However, the couple seprate shortly after her birth, and a custody would ensue. Charges of ab use of Kim withholding their daughter from Papers, freestyles, and more would all surround their tumultuous battle. But the couple appeared to work everything out when in 2015, Mr. Papers issued a public apology to his “best friend” and a call to arms to get his family back on track.

“I want to apologize to the girl that I Love and the only girl I will ever Love [Lil’ Kim] my baby’s mother/ best friend,” he wrote in a since-deleted post on Instagram, according to HipHopWired. “She is an amazingly beautiful girl inside & out and the realest girl I kno … My heart is with her. I made a lot of mistakes growing up and I even made mistakes after I grew up but one of my biggest mistakes was losing my wife and all that time with my family … there is no female out here, rapper chick /celeb chick, or regular female that is Badder or flyer than Kim,” he concluded before adding, “‘nobody !!!”

Kim caught wind of his apology and the wall seemed to begin to crumble as she took to social media to express how hard it was to remain mad at him after a “sweet” gesture. “We all make mistakes none of us are perfect, but it’s when we can acknowledge our mistakes is when we begin to grow into the beautiful men and women God intended for us to be,” wrote Lil’ Kim, as per Ice Cream Convos.

“I love [Mr. Papers] and always have,” she continued. “We have been thru h ell and heaven 2gether and have made a beautiful baby girl, we were on our way to being a very happy family but the devil has tried to intervene many of times even to the point of bringing us into court to a nasty custody battle but what the devil meant for bad God turned into good.” Kim also shared that they could now move forward as a “happy and healthy family.” Their relationship over recent years seems to be on the up-and-up as they continue to parent their daughter and grow as a family. Over the weekend, Kim stepped out for an appearance at the BET Awards and performed a rousing tribute alongside Rapsody, Monie Love, and MC Lyte in honor of Queen Latifah.

The performance garnered acclaim from fans, who loved the overall energy of the women and brought nostalgia to the forefront. Fans who also missed Kim’s presence also were excited to see the “Shut Up,” rapper back on stage. Rapper 50 Cent, however, found fault in Kim’s appearance, mainly her choice of outfit. The two have a past relationship in that they collaborated on their 2003 hit single “Magic Stick”. Taking to Instagram, 50, who no one is safe from on social media, shared a side-by-side picture of Kim with an owl with the caption, “Who did this shit, [eyeball emoji] this ain’t right.” Not one to make any jokes go further, Mr. Papers quickly chimed in to let 50 know that his wifey isn’t one to play with. “Leave my wife out the jokes you heard,” he said to 50.

Tierra Boddie – I don’t understand what’s his beef with BLACK women. Only time you hear from him is when he is trolling a black women. If “cancel culture” was real he would be my

Seleta Williams – When I was a child I act like a child I spoke as a child, when I became a “MAN” I put away childish things.

Pink Space Barbie – People like 50 cent gain power over People when they get a reaction on what they post..best thing is to ignore and move on