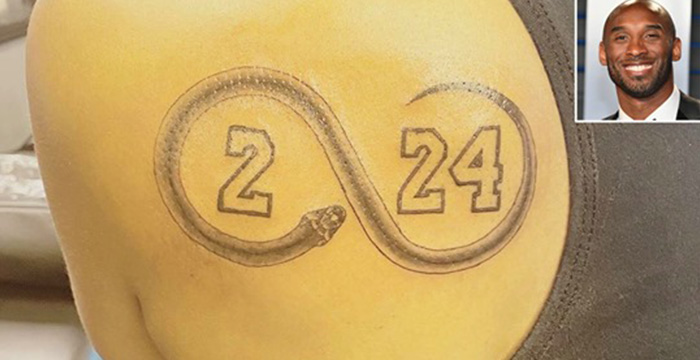 Kobe Bryant’s sister is honoring the NBA legend and her niece Gianna Bryant with a new tattoo. Sharia Washington shared an image of the ink on Instagram on Wednesday. Etched on her shoulder, the tattoo features Kobe and Gianna’s basketball jersey numbers ― 24 and 2, respectively ― surrounded by a black snake in the shape of an infinity symbol. The snake is a reference to Kobe’s nickname, “Black Mamba.”

Washington thanked tattoo artist Peter Barrios in the caption. Barrios posted his own note on his page about the work, writing that he didn’t take his own photo “out of respect” but thanked Washington “for laughing with me today and letting me do this for you.”

“I will never forget our conversations. Much love and respect your family,” he wrote. Kobe and Gianna lost their life in a tragic helicopter crash last month alongside seven others.

They were both commemorated earlier this week during a special memorial ceremony hosted by the Los Angeles Lakers and the Mamba & Mambacita Sports Foundation.

Vanessa Bryant, Kobe’s widow and Gianna’s mother, gave emotional eulogies for both of them, telling the crowd: “God knew they couldn’t be on this earth without each other. He had to bring them home to have them together. Babe, you take care of our Gigi. … We love you.”

This Article Was First Published On huffingtonpost.ca