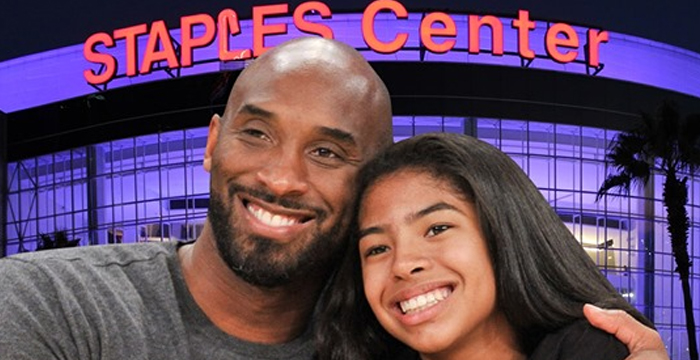 12:24 PM PT — Shaq just spoke about Kobe, and his eulogy was full of levity and laughter as he recounted stories about him and Kobe when they dominated the NBA for years. One memorable moment he recalled … Shaq said some of the other Lakers players had complained to him about Kobe not passing — and Shaq said he’d talk to him. He told the crowd that he reminded Kobe there’s no “I” in team, and said Kobe responded, “Yeah, but there’s a ‘ME’ in that.”

The crowd howled with laughter. Ending on a serious note, Shaq said he knew Kobe was in heaven with Gianna teaching her new moves … and that they’d meet again one day. Shaq called Kobe his little brother and got a standing O from inside STAPLES.

12:09 PM PT — Michael Jordan full of tears while talking about his relationship with Kobe, detailing how the Lakers superstar would seek advice in all aspects of life … and not just basketball. MJ says Kobe could be a “pain in the back” … but admired his passion. Jordan said he felt like a big brother to Bryant. Jordan even joked that he wasn’t trying to get too emotional during his speech … saying he didn’t want another Crying Jordan meme taking over the internet.

11:58 AM PT — Kobe’s longtime agent, Lakers GM Rob Pelinka, just gave a heartfelt speech about his best friend, and actually made a pretty stunning revelation … KB was actually texting him from the chopper before he and the rest of the passengers perished. Rob says Kobe was asking if Rob knew a baseball agent in Southern California who might be able to help a friend’s daughter get an internship with a team.

That kid, as it turned out, was Lexi Altobelli — the surviving daughter of the Altobelli family. Her father, John, mother Keri and sister Alyssa, were three of the 9 people total who loss there life. He made it clear one of Kobe’s final acts on this Earth was attempting to help someone achieve something great, and he only had others’ best interest at heart up until the end.

11:11 AM PT — Vanessa Bryant just gave an incredible speech — remembering Gianna as an amazing daughter who would have changed the landscape of womens pro sports in America. Vanessa says Gianna was laser-focused on making the WNBA and being the best player in league history. She also remembered Kobe as a loving father and devoted husband who took pride in doing all of his daddy duties after his NBA career wrapped up. After her speech, Michael Jordan helped walk her off the stage while the crowd gave her a passionate standing ovation.

10:45 AM PT — Jimmy Kimmel is making the opening remarks at the memorial full of tears while remembering his friend.

10:33 AM PT — Beyonce sang the opening number at the Kobe tribute .. performing her song, “XO.” She followed that up with “Halo.” It’s a very emotional scene at Staples.

10:28 AM PT — The stars have begun to arrive to the memorial … Kim Kardashian and Kanye West, Kris Jenner, Dwyane Wade, Gabrielle Union, Magic Johnson and others are on hand. As are Michael Phelps, Alex Rodriguez, Jennifer Lopez, G-Eazy, Kyrie Irving, Steph Curry and more.

6:33 AM PT — Michael Jordan is in town — clearly here to honor Kobe at Monday’s memorial — and on Sunday night, he had dinner with fellow NBA legend Jerry West at Craig’s in L.A. No word as to what role MJ will have at the memorial — but his friendship/competitive rivalry with Kobe was legendary. MJ was Kobe’s idol growing up — and the two grew to be close friends. When Kobe depart, Jordan said, “I loved Kobe — he was like a little brother to me. We used to talk often, and I will miss those conversations very much.”

Thousands of Kobe and Gianna Bryant mourners are just hours away from packing Staples Center for a ceremony celebrating the Mamba and Mambacita’s lives … and TMZ Sports will live stream all of it. The event is expected to be incredibly moving and emotional. As we reported, the demand to attend the memorial was unprecedented. THOUSANDS of people applied for tickets — more than 88,000 just in the first 5 hours.

The Staples Center only holds 20,000 … and many of those tickets had already been accounted for with Kobe’s family, friends and the NBA community. We’re told officials wrestled with the idea of moving the event to the L.A. Coliseum — which seats closer to 80,000 people — before ultimately settling on Staples. After all, it’s where Kobe played for 20 years and became a beloved figure in Los Angeles and around the world.

Tributes are popping up all over the city. Check out this mural in the Hollywood-area near The Grove. We’re told just like Michael Jackson and Nipsey Hussle’s memorials — which were also held at Staples — streets around the building will be closed off for security and traffic control. Law enforcement is urging fans without tickets to stay home and watch the broadcast on TV or online. The ceremony will NOT be broadcast on the screens outside Staples.

It’s unclear who will speak at the memorial … with dozens of people close to Kobe and Gigi wanting to take the mic to say kind words about the Lakers legend and his daughter. We broke the story, Bryant and his daughter were 2 of 9 people who tragically lost their lives in a helicopter crash on Jan. 26. Vanessa Bryant, who is expected to attend the event, said of the losses just days after the tragedy, “We are completely ruin by the sudden loss of my adoring husband, Kobe — the amazing father of our children; and my beautiful, sweet Gianna — a loving, thoughtful, and wonderful daughter, and amazing sister to Natalia, Bianka, and Capri.”