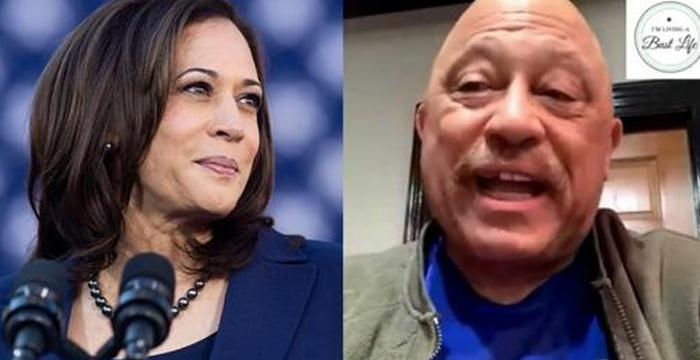 If you are former NBA player Kwame Brown, May 2021 has been a rough one for you. The 2000 first draft pick has been openly mocked by former teammates, commentators and even Charlamagne Tha God. He’s been judge for his performance during his 13 year long career and the way he’s handled bad feedback in the last few weeks by dropping some deeply personal charge against people via his social media. However it looks like the heat might actually be off of him after a pretty problematic interview with television Judge Joe Brown, who said some disparaging things about current first lady Kamala Harris.

Kwame Brown’s career in the NBA has been polarizing to many. The South Carolina native was drafted first overall pick by Michael Jordan and the Washington Wizards back in 2001, straight out of high school. Kwame Brown then went on to become one of the most notable draft busts in the NBA’s history. He went on to play for the Los Angeles Lakers, Memphis Grizzlies, Detroit Pistons, Charlotte Bobcats, Golden State Warriors, and Philadelphia 76ers before leaving the league in 2012. He left with the reputation of being one of the worst draft picks of all time and has been the subject of many jokes over the years.

While he’s been mostly busy defending himself from judge in recent weeks, Brown took a break to do a 2 hour sit down with Judge Joe Brown where the two discussed a wide range of topics. One topic in particular that stood out was the Judge’s thoughts on Kamala Harris. Referring to her as “Mrs. Emhoff”, the Judge went on to discredit the Vice President saying she into office.

The judge began by claiming Harris’ isn’t black. “She’s got two Jewish children she adopted. [She] married a Jewish husband whose got an interesting reputation,” Judge Brown said. “She’s a w-itch and she is a co-rrupt. She’s been corrupt her whole life and she [messed] her way to the top. They used to detail this in the LA Times with her s-xual escapades. She’s damn near everybody trying to get up. She used to be frat when she was at Howard. And she ain’t Black.”

He continued “I actually met her father in Jamaica,” Judge Brown said. “I was the guest, sat at the Governor General’s table and he was a professor. And he represents as a Hindu Brahman. He admittedly has some Irish in him. The person that [Kamala] Harris is saying is her Black great-grandmother is in fact — according to daddy in an article he wrote, which is now been cleaned up on the online edition of that magazine — was a Hindu house servant, not a Black woman. So her mother is listed on her birth certificate as Caucasian, even though she’s dark, but she’s a Hindu Brahman Tamil.” Watch the full interview below.

Hasan HK Ali – If she did or didn’t it really doesn’t matter. What matters is that she made it. Can she do her job?? I don’t care who she is sleeping with that is her business.

Tiffinay Venson – Just ignorant, how does he know; like he was there! Humans nerve me! Quit worrying about other folks and tend to your own mess. Male chauvinist clown!!

Shatisha Smith – This is a very ignorant statement everyone had a past including him let’s not tear each other down I believe he is upset because a woman is in a higher position than him. Period .

Ida Robbins – To all you self righteous people, look at your life before you start calling out the VP, or anyone else for that matter. Are your hands clean ? What job do you have ? Could you be jealous? Judge Joe Brown, no long exist . I will boycott anything he is involved in. How dare he ?