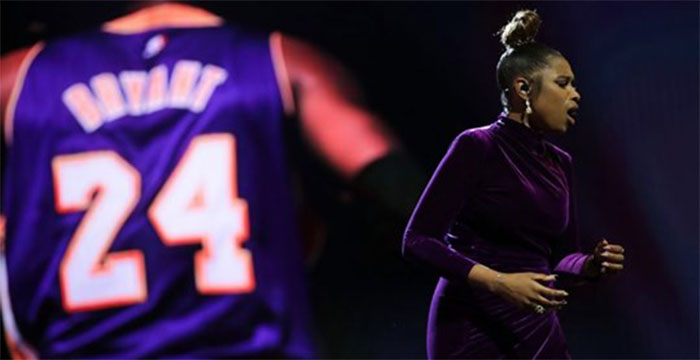 Grammy award-winning singer Jennifer Hudson belted out a heartbreaking tribute to Kobe Bryant before the National Basketball Association’s 2020 All-Star Game Sunday evening in Chicago three weeks after the sports legend’s tragic end in a helicopter crash. Hudson sang “For All We Know,” standing before giant photos of Bryant tearing up the court — and embracing his children.

“We will never see another basketball player quite like Kobe,” Magic Johnson said before the game as fans chanted the Laker legend’s name and kept an eight-second moment of silence in honor of Bryant’s jersey No. 8. “He was passionate about being a great father, husband, filmmaker.” Before the game, Common also gave a moving tribute, highlighting Bryant’s legacy. “Even in the darkest times, you’ll feel Kobe’s light,” he said.

Halftime performances featured Chance the Rapper, ﻿Quavo, Lil Wayne and DJ Khaled. Earlier Sunday, the NBA released a powerful video tribute to Bryant by Dr. Dre that also highlighted touching moments with Bryant’s children and his Mamba moves. Dre was recruited, along with videographer Gibson Hazard and Jack Bannon, to do the video by the NBA.

Bryant lost his life with his 13-year-old daughter, Gianna, six other passengers and the pilot when the helicopter he was traveling in went down in hilly terrain near Calabasas, California, on Jan. 26. No one survived. When the game got started, players on LeBron James’ team wore Gianna’s No. 2 on their jerseys.

The rival team, led by Giannis Antetokounmpo, wore 24, Bryant’s number during the latter half of his time with the Los Angeles Lakers. In Bryant’s honor, the All-Star Game MVP award was permanently renamed the NBA All-Star Game Kobe Bryant Most Valuable Player. Bryant won the award four times, tied for the most ever. The game was also revamped in a tribute to the former Lakers star.

Typically scores are tallied in the fourth quarter to determine a winner. This time, the score of the leading team going into the fourth quarter was noted, and the clock turned off. That team’s score plus 24 points became the target. The first team to reach that mark, Team LeBron, won the game.

On the morning of the NBA All-Star Game, the league typically pays tribute to retired players at the Legends Brunch. Two years ago, when the game was in Los Angeles, NBA officials hoped to honor Bryant. He declined, however, explaining that Gianna had a game that morning, The Associated Press reported.

“That said to us everything about his priorities,” NBA Commissioner Adam Silver said Sunday. In a wild finish Team LeBron beat Team Giannis 157-155. Kawhi Leonard (Los Angeles Clippers), who scored 30 points, won the first-ever Kobe Bryant MVP award. The next Bryant tribute is Feb. 24 at the Staples Center in L.A., where a celebration of life will honor Kobe and Gianna.

This Article Was First Published On huffingtonpost.com.au