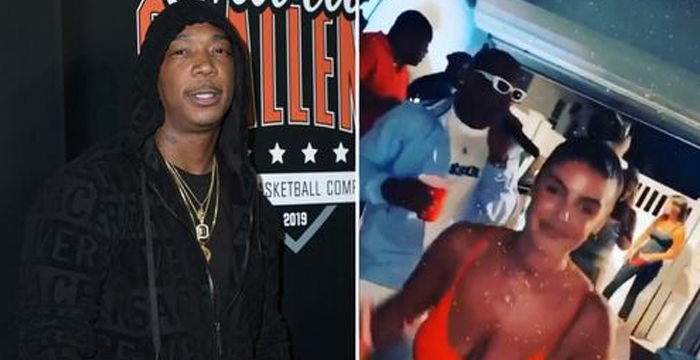 For most people, the pan -demic has undoubtedly driven them crazy and they await the moment that outside opens back up. Until then, many are maintaining the “better safe than sorry” mantra by sticking to the mask mandates (even though restrictions have begun to loosen). For others, their fast tracking getting back to normal while living on the wild side. Some celebrities are tired of being couped indoors and are ready to get out their to their adoring fans, no matter the safety concern apparently. Enter Ja Rule. Ja Rule was once a chart-topper who ended up as the back of many jokes, especially with the help of his longtime rival, 50 Cent.

There have been instances where the “I’m Real” rapper ended up in situations that wrote unfortunately wrote themselves into jokes. Nevertheless, Ja Rule pushes on. The rapper’s glory days are long behind him though, it seems. Hits that were one-time favorites of many such as “Always On Time”, “Mesmerize”, or “Livin It Up” all tend to be overshadowed by other antics, and perhaps some of his fans did not grow with him. Nevertheless, Ja Rule pushes on… The rapper was given the opportunity in 2019 to perform for the halftime show of a Milwaukee Bucks vs. Minnesota Timberwolves game for their “90s Night”, although he’s a “2000s artist” as he said. The response of the crowd was far from enthusiastic as he emphatically asks “Are we ready?” After a fit of silence, the rapper says “I guess not.”

Quickly the Internet went for the jugular with hilarious memes at the rapper’s expense, prompting him to take to social media to offer an explanation that technical difficulties was the reason for the show’s delay. He insists that he still “rocked” his set. The Minnesota Timberwolves even jumped in on the fun, tweeting that “We too were hustled, scammed, bamboozled, hood winked, lead astray!!!” With the pan demic rearing its ugly head on the world, drying up the funds for many, Ja Rule seemingly took up a new hustle: private performances.

An Instagram post showed the rapper performing in what seemed to be a household with about 15 people in it (still not necessarily Covid safe, but hey), and soon enough the rapper himself shared it on his own platform, confirming it was indeed him.

Ja Rule thanks his supporters for the love in the post, then proceeds to share his booking information for those who might be considering booking the rapper for their own personal performance. However, he insists that his rate is not cheap. Of course, as history would have it, wherever a “Ja Rule fail” occurs, 50 Cent is sure to follow. Catching wind of the rapper’s new hustle, 50 roasted: “If you don’t want to end up doing private birthday parties for 15 people. stay out of my way, OK.”

SNEAKERS – Every time 50 mentions Jah he’s doing him a favor he’s keeping him relevant now it’s Jah’s Job to take the ball and run with it.

Jazziel Jimenez – Man Ja’s music still jams. I wouldnt mind booking him in one of my house parties. I bet everyone still gonna be turnt up! Just people listening to 50 cent trolling that boy.

ButterBwoi 13 – I’m not mad at him, house full of attractive women who still admire him and love his music?! W in my eyes.