‘It’s Never Too Late’: 19-year-old Who Aged Out Of Foster Care Adopted By Her Caseworker – Video 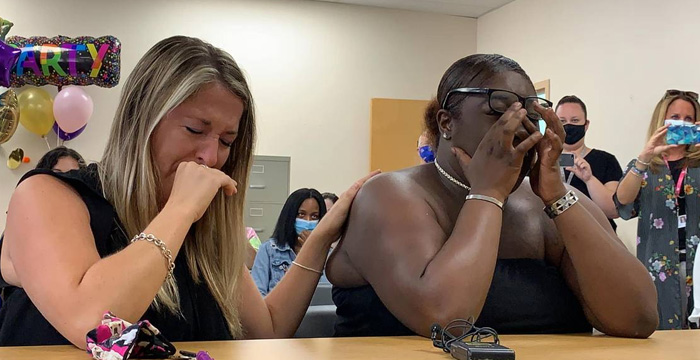 A teenage girl in Bradenton, Florida, finally has a family to call her own thanks to her outstanding and kindhearted caseworker. Monyay, 19, aged out of the foster care system but was given another chance at having a family when her caseworker decided to take her in as her own. Lead Paskalides, Monyay’s caseworker, welcomed her into her own home with loving and welcoming arms and took on the role to be the young woman’s mother in April 2021.

Most foster care systems help children up until the age of 18, although some places in the United States have different circumstances in their respective areas. According to Florida’s Children First, most foster homes in Florida don’t keep children in foster care past the age of 18, although some allow adults up until the age of 21 to stay in their facilities. Some challenges have arisen from this, including a lack of housing arrangements and transportation for those still in need of foster care.

Monyay had aged out of her foster home and needed a solution, which is where her caseworker made the fantastic decision to step in full-time. During their long relationship as caseworker and client, Monyay and Paskalides became real friends and formed an even stronger mother-daughter relationship. Finding a forever home was something Monyay had been craving all her years in the foster care system. Even though their future home together was right in front of them, it took a while for Monyay and Paskalides to finally make their bond a certified mother-daughter relationship.

Monyay spent many years in state care and group homes throughout her years as a teenager, which is where she met Paskalides, according to WFTS Tampa Bay. Although the two spent a lot of time together to help Monyay find her forever home, the teenager was not too keen on the social worker at first. “She told me what she was going to be doing and helping me out with my case, and I didn’t like her; she’ll tell you that,” Monyay said about Paskalides. After working together for five years, the two got closer and closer and even formed a sweet bond with one another. “She was very motivated and had aspirations for a future, and so I knew she just needed support,” Paskalides said.

WFTS reported that Monyay started feeling more alone during her senior year in high school, as she realized she had a lot on her plate and just wanted a motherly figure by her side. “My senior year is when I went through one of those, ‘I don’t want to do it anymore, I’m done,’ and she said, ‘I got you,’’ Monyay explained, revealing that her caseworker had stayed by her side through thick and thin. According to Fox 13 News, Monyay graduated from high school a year early and volunteered her time to help other children in foster care.

Paskalides realized she needed to step up and be that motherly figure Monyay so desperately wanted and needed. “She always said, ‘I wish you could adopt me, wish you could adopt me,’ and I couldn’t because of the job and then I was watching a documentary where the person had been adopted as an adult, and I had never really heard of it,” Paskalides explained. Monyay aged out of foster care, which is when Paskalides realized she could then adopt her. Luck was on Monyay’s side, and Paskalides was able to go through with filing the proper paperwork to adopt the teenage girl.

The process was finalized on April 27, 2021, over a zoom meeting in front of a judge. Monyay finally had the mother she had always wanted, and Paskalides gained a daughter of her own. “We’re so happy; we both wanted this for so long,” the caseworker said. “Being told ‘no’ so many times, to hear that ‘yes’ and to hear them pronounce her as my mom, it just sunk me,” Monyay explained, overwhelmed with her happy situation. Paskalides chimed in and said, “She was always a kid that did not deserve to go through life without the support of a family.” While making the decision to have a child or adopt is a big one, it came easy to Paskalides once she realized it was something she was able to do. “It was important to me that she knew that she was wanted by somebody, that someone loved her,” Paskalides said.

Even though it took a few years to finally happen, Monyay encouraged others in the foster care system to stay optimistic about the search for their forever home, proving it’s never too late. “It’s never too late because I’m grown but I’m still being adopted,” Monyay told the Miami Herald. Even though they had been by each other’s side for many years, it wasn’t until April 2021 that Monyay and Paskalides were finally able to solidify their relationship and officially become mother and daughter.

Eric – As someone who was kic-ked around 25+ different foster homes & then dumped on the street at 16, the need for an unconditional love like this is stronger then most people will ever know. I’m really happy she found hers!

Amber – This is sad her whole life in foster care bouncing house to house and she still can keep a smile on her face and graduate thank god she had a good case worker who actually cared.

Gene Peak – I was emancipated out at 17, but my last foster parents became MY parents till they pas-sed….I want EVERYONE to know George and Romola Young were the best thing that EVER happened to me besides the birth of my children…True love doesn’t have to come from gore…I miss you mom and dad…

Wendy Wendy – This goes to show you how important it is to have a parent. Even at the age of 19, she still needed a family. I’m glad she finally has one. God bless them both.

luvmifro – We need more social workers like Leah! It’s a hard job and doesn’t pay the best. But many of us are passionate about what we do! Such a heartwarming story