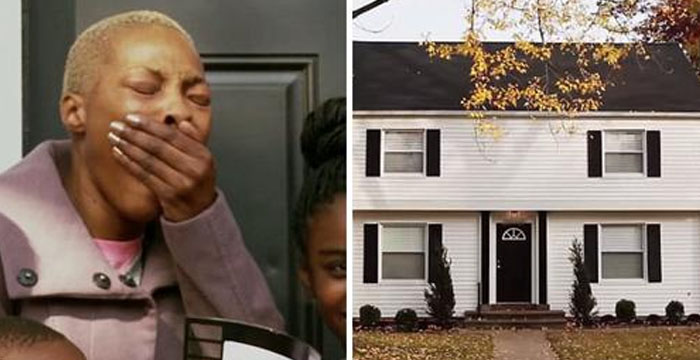 A cleaning lady got the surprise of her lifetime, forcing her to put down her mop and pick up a glass of champagne instead. Cara Simmons, a single mother-of-three from Cleveland, Ohio, recently received a surprise visit from Prank It Forward – an organization dedicated to doing ‘pranks for good’. She was secretly filmed as she went to a house to clean it, before being told the four-bedroom property was hers to keep ‘forever.’

For several seconds she was lost for words, with ‘thank you’ being the only thing she could say. Cara’s sister, Glo Nicholson, explained that the treat was well-deserved. ‘Cara is an amazing person, an amazing sister, she’s selfless, she works hard. She’d give you the shift off your back,’ she said in a video interview. Cara’s boss, Mary Jo, agreed that Cara was in need of a treat. She and Glo were the ones who called Prank It Forward and put Cara up for nomination.

‘She gives her all, to her work and her family,’ Mary Jo said. ‘Cara has struggled . . . financial concerns . . . always trying to make ends meet.’ As well as struggling financially, Cara has also suffered from exhaustion over the past few months, causing the medical bills to stack up. Before the Prank It Forward surprise, Mary Jo told Cara she would be visiting a very important client.

What Cara didn’t know was that the whole thing was a set up. When she arrived at the house the client, played by an actress, told her that she’d already cleaned the place. She then asked Cara to sit down at the dinner table and taste test a gourmet meal. After tucking into a menu trimmed with lobster, truffle and finished with a spot of pumpkin cheese cake, Cara was then asked to trial a four-hand massage.

‘What’s going on,’ she is heard exclaiming in CCTV footage of the event. She then starts to realize that something is suspect when a removals man arrives with boxes of her possessions. It’s then that she’s handed over the house keys too. ‘There’s a master bedroom here, there’s a room for every kid,’ Prank It Forward start Greg Benson says after he takes off his removal man disguise.

Gail Harrison – So happy for Cara and her children. She deserves it all. Hoping this gift will take some pressure off of her.

Sharon Jackson – These People Appreciated Her , Now Days Others Don’t the Whole Time U Give Them Years of Your Life And They Give Nothing. God Bless the Family Who Cared about Their Housekeeper

Joseph Emegba – You serve the Living God first in your life. So i’ m more much than happy to read this story online Congratulations..

Louise DeCoteau – Such a good thing to do for a well deserving mother. It isheart warming to see those who have much help those who have little. God bless you all.