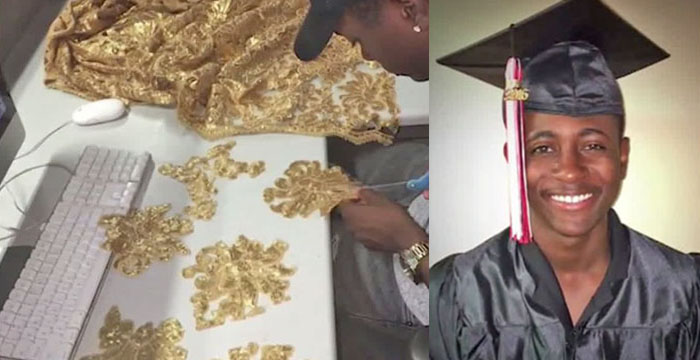 Jimelle Levon has already faced challenges some adults may never be confronted with — or have to overcome. At 10 years old, he and his mother became homeless. For much of his life, Jimelle shuffled with his mom from shelter to shelter. Nevertheless, Jimelle never gave up on himself. At 14, he learned how to sew. To celebrate his high school graduation, he created a life-changing prom dress for his date.

Inspired by the film Coming to America, Jimelle created a suit for himself and a gown for his date, complete with stunning gold appliqués. He shared photos, which instantly went viral — grabbing even the attention of Steve Harvey, who welcomed Jimelle onto his show.

Now, the Boy is attending Clark Atlanta University as a full-time student and simultaneously running his own fashion company. His custom-made gowns sell for up to $450 each. There’s even a waiting list for those who want to support the young designer.

He admits that he is too busy keeping up with his studies to fulfill every request. Moreover, the teenager has become a local inspiration. Hard work has always been a part of Jimelle’s life. “Me and my mother lived in a shelter before, when I was in fifth grade,” Jimelle told WCMH.

“From there on, once I cuff sixth grade, I was always a hard worker, either shoveling the snow or anything to gain money, because I didn’t want to be in the predicament anymore.”

This Article Was First Published on littlethings.com