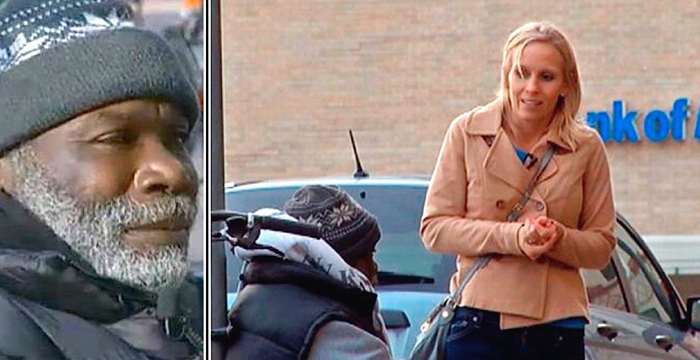 A homeless man who returned a woman’s lost engagement ring has bought himself a house with donations given by strangers who were touched by his honesty. Billy Ray Harris has gone from begging on a Kansas City street corner to living in a house of his own after $180,000 was raised by people who wanted to help get his life back on track. The page was set up after Mr Harris returned a $4,000 engagement ring to Sarah Darling, who accid-en-tally dropped it into his change cup earlier this year in the Missouri town.

Ms Darling’s husband, Bill Krejci, set up the online donation page as a thank you to Mr Harris who could so easily have sold the valuable piece of jewellery. In just three months a staggering $180,000 was raised on the site which describes Mr Harris as ‘a great man who could use some help.’ Since the astonishing sum was raised, Mr Harris has bought a house, a car and has obtained a part-time job.

His biggest reward however was to be reunited with estranged family members who thought he was depart. Mr Harris was reunited with family members he hadn’t seen for 16 years after his good deed made headlines around the world. During a television interview with Mrs Darling and her husband, his estranged brothers and sisters appeared to his surprise. The family who had travelled from their home in Texas hadn’t had contact with their brother for over a decade, and assumed the worst. They are now in regular contact and Mr Harris is enjoying getting to know nieces and nephews he never knew he had.

He told TODAY: ‘When I think of the past, I think, thank God that it’s over. I feel human now.’ Mr Harris is grateful for the way his life has been turned around with the help of strangers. He said: ‘This is what they call the American Dream. ‘I want to thank all the people that helped me out. I want them to see where all their efforts, blessings and kindness is going.’

He has made lifelong friends in Ms Darling and Mr Krejci, who he regularly goes to hockey games with. The couple have a 20-month-old daughter who they hope to introduce to Mr Harris to show her ‘the difference between what’s right and wrong.’ Ms Darling is relieved she was able to play a part in helping the honest man. Speaking to Today, she said: ‘A lot of people came together to change this person’s life when he is someone who really deserves thats, blessings and kindness is going.’

angelwings1221 – Seems sad that after all these yrs, they find him after he gets this money, wonder if they were really looking for him before that? Hope he does not just let ppl take it from him, hope he gets a house & car, & uses the money for himself, not many honest good ppl left out there!!!

youngadam wang – Very good video make me cry…Congratulations to him with his family reunion.God blessed him and his family.

dj cutlas – I live in the South Jersey/Philadelphia area….. And I will come home from work from UPS outside of South Philly into Camden & And they would be guys like him sitting on the Walter Rand transportation center floor….. People would mistreat them daily, And I would sit down and talk to them and get to know them. Most of the people had went through hard times, or lost loved ones and couldn’t recover from it. You should never judge a book by its cover because you never know the hidden treasures of them