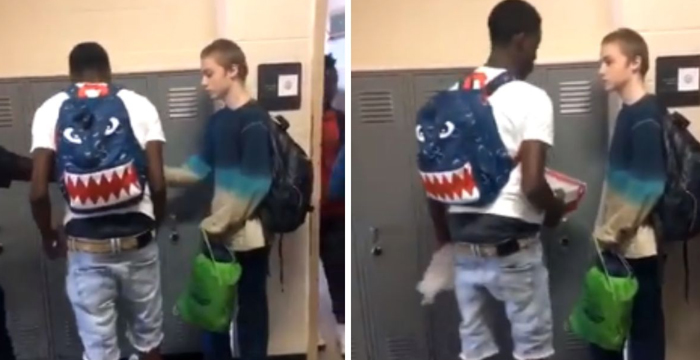 Two high school students surprised a freshman classmate with new clothes after he had been bul-li-ed for three straight weeks at his new school. Michael Todd has been getting bul-li-ed at his new school since the year began. He would wear the same clothes everyday and students at MLK College Preparatory School would make fun of him for it. “I’ve been bu-ll-ied my entire life,” Todd said. “I really don’t have clothes at home. My mom can’t buy clothes for me because I’m growing too fast.”

Todd was taken out of this third period class at the Memphis-area high school Tuesday and was met with a wonderful surprise. Todd froze when football players Kristopher Graham and Antwann Garrett handed him a gift. Inside were bags full of shirts, shorts and shoes. “Awesome. The best day of my entire life basically,” Todd told WHBQ. “He wasn’t smiling or anything and I was like, ‘I think this is going to make you smile,’ Graham said.

“I told him, ‘we’re in the same third period and I apologize for laughing at you and I want to give something to you to make it up.’” “When I saw people laugh and bu-ly him, I felt like I needed to do something,” Graham added.

Graham said he went through his closet and grabbed a bunch of clothes and texted his friend Antwan Garrett to do the same. “It was a weak moment for me. I almost cried,” Garrett said. “And then I cried at lunch when he said, ‘you two are the only ones to give me a gift,’” Graham said. “You guys are the best guys of my entire life,” Todd told the two boys.

Donna Cheswick Hines – “Growing too fast” .. definitely can be expensive.. my G-Daughter is growing about an inch a month right now.. hard to keep in clothes !! And shoes ! Already wearing a 9 and only 12 ! Hand-me-down Would come in handy for these kids !!

Heather R Warner – What wonderful young men not only to apologize but to choose to help. I pray they go far in life and continue to help others. These are the children we should be celebrating and raising higher.

Nate Anderson – Kudos to these kids for having that kind of social awareness. Chris and Antwan are clearly going places.

This Article Was First Published on cbs17.com