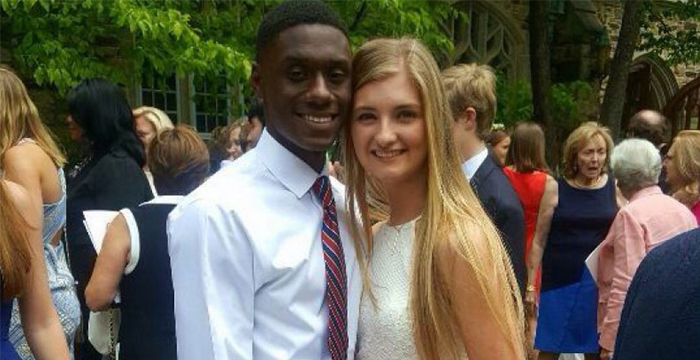 A student has raised £11,000 through crowdfunding after claiming her parents cut her off after discovering she had a black boyfriend. Allie Dowdle, 18, says her dad Bill told her she was never allowed to see Michael Swift again after she showed her father a photo of her new fella. She writes on her GoFundMe page : “About a year ago, I told my parents that I’d started dating a boy named Michael, pictured with me above.

“Hoping to share him with my family, I showed my parents his picture, and the conversation was over before it even began. “My dad did not give me an option: he told me that I was not allowed to see Michael ever again. “Why? Strictly because of skin color. It wasn’t a quiet ‘no’ either. I’ll never forget the yelling my parents did, when they expressed how disappointed they were in me, that I could do so much better.”

The teenager , from Memphis, Tennessee, said after the blazing row, she was blocked from using her personal savings and no longer had access to her car or phone, leaving her penniless and unable to continue her education. She wrote: “As I am 18, my parents have chosen to no longer support my future, stripping me of all my resources.” Allie has already smashed her $10,000 target, with her running total at around $14,000 (approximately £11,470).

The 18-year-old’s dad has denied that the issue is about race. Bill Dowdle insists he and his wife will accept any young man that their daughter choses to date, and only cut her off because she started dating Michael in secret. But he admitted there were ‘issues’ involved with ‘bi-ra-cial dating’ in the southern states of America.

He told the New York Daily News : “[She’s spoiled] and it became obvious that she needed to go out in the world and grow up.” But Allie, in her plea for cash to cover her tuition fees, posted: “I did not know what to do. I couldn’t comprehend how someone could be seen as less because of pigment. I still can’t comprehend it, and I never will be able to. “How could my love for another person be wrong because of his skin colour? “And why would that make me unworthy of a future I’ve worked so hard for?

“Because my parents have listed me, their own daughter, as someone who is not worthy of their time and money, I have turned to the public for support.” But some, commenting on her GoFundMe page, hit out at her appeal for money. Susan Martin wrote: “Dating a black man and sending a privileged white girl to college who can’t get a job because her parents took away her car is absolutely ridiculous. Take a bus.” Meanwhile Marissa Kizer wrote: “Sending a white girl from a middle-class family to college is not figh-ting rac-ism. In fact, expecting to avoid work, student loans, etc. and be treated like a hero for dating a bl-ack guy seems pretty ra-cist to me.”

Williams J – She really lost out on her inheritance for a dude that she’s not gonna be with in about 10 years. Who does that?

Gabriel Navarro – when you have to panhandle and set up a gofundme to go to college, smh, something is wrong with the system I don’t know how to fix it tho

Chloe wilson – I think it is wonderful that people reached out to these three. There are some people who are very kind. Hope all of them are successful in life.

Francis Smith – I wanna hear more from the parents, honestly. I’ve seen a lot of teens who act on this behavior with relationships and many of them fabricate stories just to get what they want.

This Article Was First Published on mirror.co.uk