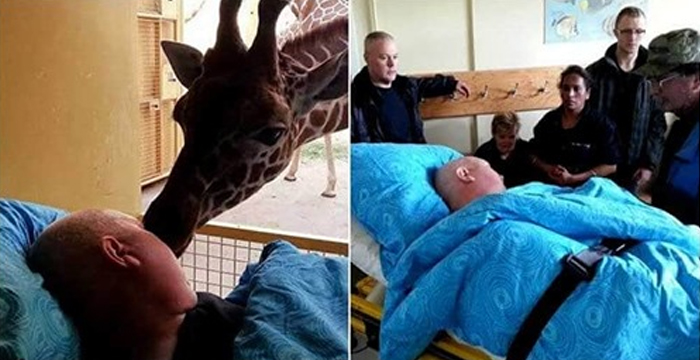 This reminds me of the book named “Who cry when you depart?” by Sharma R. that I read two years ago. Who will stay beside us at the time we’re gonna leave this world? Family and friends, of course. There is nothing to regret when having these people to stay with us in the last stage of life. But there are friends, even family members that can not say. A dog that you’ve raised for years. An animal that you’ve cared for at work. This story will touch the heart of millions. A sad moment when a zoo worker received final kisses from giraffes.

Mario Ejis worked at the Rotterdam’s Diergaarde Blijdorp zoo in the Netherlands as maintenance staff for 25 years. The 54-year-old man who suffers from a disability was responsible for caring for some of the most amazing creatures in confinement. He spent almost half of his life cleaning the animal cages and making friends with of the wild. But Mario battled terminal malignancy and was unable to go to work for some time. In 2014, the zoo worker knew that he didn’t have much time left, so he made one last request – he wanted to see the zoo again.

Mario’s condition was greatly advanced and he was permanently confined to the bed, according to Independent. He struggled deeply with speech and was finding it difficult to make coherent sentences. However, the longing on his face was all the words anyone would have needed to be convinced. A charity organization named Ambulance Wish Foundation came to his service. Mario was transported to the hospital in a specially designed ambulance so he could his friends again.

Something incredible happened when Mario was taken to the giraffe section. It was a sad sight to watch as the giraffes moved close to the ambulance carrying Mario, sticking their heads one after the other through the window. They could sense that he was in a lot of pain and was suffering greatly. They nuzzled him, kissed and comforted him with sad expressions in their eyes.

“These animals recognized him, and felt that (things aren’t) going well with him,” said Kees Veldboer, the founder of the Ambulance Wish Foundation. The experience had a great impact on Mario. “(It was) a very special moment. You saw him beaming,” said Veldboer. The zoo worker had the opportunity to see the zoo that used to be his home one last time. He also got a chance to say goodbye to his co-workers.

The Ambulance Wish foundation is a charity that transports terminally ill patients to a place of personal significance as their last wish. Originated in the Netherlands, the charity has already been established in the UK, with over 1506 volunteers. When shared on Social Media in 2014, Mario’s story went viral on social media. It was picked up by several media companies and shared on popular websites and Twitter. It left a lot of people awed at the giraffes’ ability to sense Mario’s pain.

One intuitive comment on Buzz Nick read “Animals are the most beautiful and ethereal beings. They see, feel and touch our souls in unimaginable ways. The depth of their senses is a gift to those who unconditionally love and respect these amazing creatures gifted to us by our magnificent Creator. Rest In Eternal Peace, Mario. You were their Hero.” The giraffes may not have been able to detect in their long-term friend’s body, but they could certainly sense his pain and suffering. Like the pets and many other animals that we care for, they’re truly true friends of us.

Gertie Loder – Animals have more heart than human beings. This is precious.

Elizabeth Marriott – That is a wonderful gift from a beautiful animal, friend who have feelings to.

Regina Merrifield – What a gift the giraffe gave his beloved friend. People need to see love ones before the pass! God bless him.

Lakins Mill-beach – Animals are sooo sincere, they sense wen a human is about to pass, esp dogs too, precious sentients. are creatures gr8 & small

Audra Audra – I hope my daughter Stripes outlives me cuz I can’t imagine saying goodbye to her. I tell her every day she’s got to live all nine lives w Mama cuz Mama doesn’t want to live one life w out her…

Valerie Ward – An animal definately knows wgen someone close to them is,nt well. So glad he got to see and receive comfort from his animals.

Linda Sarver Lilly – This is so sweet. The love that animals have is so amazing. The poor man must have been so loved by these sweet animals.

Alexander Brezzani – More and more I’m convinced of the power that animals have to understand moments like this. Perhaps they know how to understand humanity.

This Article Was First Published on pawsplanet.me