Gayle King Recalls Finding Her Ex-Husband In Bed With A Friend: ‘I Had No Clue Whatsoever’ – Video 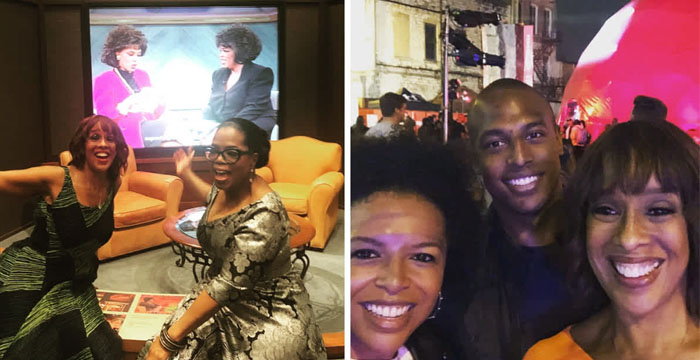 Gayle King has revealed that the woman she found having s-x with her husband was actually a friend, who, after being caught in the act, told the CBS anchor, ‘I never liked you.’ The 64-year-old made the shocking revelation during an chat with her best friend Oprah Winfrey, 65, as part of their ongoing video series The OG Chronicles, with Oprah admitting that she believes her fellow TV host was ‘scarred’ by the sad experience. ‘I think you may be scarred,’ Oprah said, while discussing Gayle’s hesitance to open up to new friends. ‘Remember you had that friend who slept with your husband, and when you found her, you said, “I thought you were my friend!”‘

To add insult to wound, Gayle said her so-called friend didn’t have any remorse for her actions at the time. ‘She said, “I never liked you,”‘ she recalled. Gayle first opened up about the shocking moment during an interview with Vanity Fair in July 2016, when she completed the Proust Questionnaire and was asked: ‘Which living person do you most despise?’ She responded to the question by saying: ‘”Despise” is a strong word. I’m not a huge fan of the woman I caught na-ed with my now ex-husband on June 24, 1990, at 9:16 pm — but I don’t remember the details.’

William Bumpus responded to his ex’s admission by telling Page Six in a statement: ‘I have been haunted with this life-altering choice. Though I have dealt with this privately . . . I publicly apologize for the major transgression that dramatically changed all of our lives.’ He also said of Gayle: ‘I have nothing but the utmost respect for Gayle and how she handled herself with grace. Despite the situation, she kept our children, as well as my relationship and involvement with them, as a clear priority. ‘Gayle was a great wife, an excellent mother, and a fantastic co-parent,’ he added. ‘I am eternally grateful for all that she has done and continues to do to enrich my life and the lives of our incredible children.’

William called himself ‘a work in progress.’ Meanwhile, when asked for comment about the identity of the na-ed woman, Gayle said: ‘She knows her name!’ Gayle was married to William from 1982 to 1993 and has spoken about their sepration in past interviews. Back in 2006, she addressed his infidelities on her XM Satellite Radio show, according to CBS News, saying: ‘I was married to a cheater.’ She went on to say: ‘I went to marital counseling. I have been divorced since 1993, so I’m all healed and everything. I have worked it out. I’m not bitter. I’m OK. I’m really OK.’

The couple has two children, a son William Jr. and a daughter Kirby. Gayle spoke about her kids as well on her radio show, saying: ‘It’s so important for people who have children together to get along. Regardless of how you feel about the other as a spouse, you still have these children to raise together.’ The Vanity Fair interview also gave Gayle a chance to talk about her best friend when asked: ‘Which living person do you most admire?’ She responded by saying: ‘Oprah Winfrey. She always does the right thing — even when no one is looking.’

The friendship between the pair has long lead to rumors of a relationship between the two, but Gayle has shot those down time and time again, saying in a 2011 interview with TV Guide: ‘In the beginning, it used to bother me. Like, “Oh, my God, I don’t want people to think I’m gay — I’m trying to get a date!” ‘But now I don’t care. I’ve given up trying to figure that out. At this stage, if you still think that, it’s on you.’ The latest installment of The OC Chronicles was filmed during the recent Holland America Line and O, The Oprah Magazine recent Girls’ Getaway cruise, and the two pals reflected on their decades-long friendship while giving their fellow cruisegoers advise about life, love, and personal relationships.

‘Gayle has been my best, best friend since we were 21 and 22,’ Oprah said. ‘So over the years, I’ve tried to make other friends with other people. ‘I remember that friend I was going to try to have and the person wanted to borrow money. I loaned it to her,’ she recalled. While Gayle optimistically believed that the friend would pay Oprah back, the media mogul wasn’t convinced. ‘I go, “She’s not going to pay me back,” and you know what I call it? My negro exit fee,’ Oprah said.

‘Who’s going to be with you and say, “It’s okay if we don’t have the limousine.” That’s what you really want,’ she said. Oprah and Gayle’s friendship has certainly pas-sed the test of time, but they made it clear that there is plenty of good-natured ribbing in their relationship. When a cruisegoer asked about what she should do about friends who leave sn-arky comments on her social media posts, Gayle pointed out that there is a ‘difference between sna-rky and play-ful.’

‘I think there is a way you can tease a friend without it feeling like you’re looiking her down or taking a dig,’ she said, prompting her friend to call her out. ‘Like the time you said you passed the TV and my b-b hit you in the eye?’ Oprah asked. ‘Oprah had on a dress with a lot of cl-vage, and I just went “Lord have mercy!”‘ Gayle explained, recalling one of the media mogul’s public appearances. ‘No, this is what you said — I got on the phone and you said: “I have a black eye,” and I said, “What happened?” and you said: “I passed the TV and your b-b hit me in the eye!”‘ Oprah clarified. Gayle, meanwhile, recounted the time she got highlights in her hair. Everyone else said they looked good, but Oprah told her: ‘You look ri-dic-ulous!

Constructive judge aside, Oprah made it clear that it’s impossible to have a true friendship with someone who can’t appreciate your success. ‘You cannot maintain a relationship with people who lose oxygen as you’re on the climb of your life,’ she said. The two pals also tackled a more serious issue when one woman on the cruise asked how she could support a family member who is in a relationship but doesn’t feel ready to leave her husband. ‘Even if you are in an abu-sive relationship, the experts will tell you that you need a plan,’ Oprah said. ‘It’s not something where you just get up and go unless your life is in da-nger.

‘You need to have a plan,’ she stressed. ‘How are you going to be able to take care of yourself and manage your life?’ Gayle pointed out that the key factor in the situation is the fact that the woman’s relative said she’s not ready. ‘You can’t help somebody who is not ready to be helped,’ she argued, but Oprah didn’t entirely agree. The philanthropist explained that she could help her by asking her what it will take to get her ready to leave her husband. ‘You can help her in the plan to get ready,’ she said. ‘

D S – Because of things like these, it’s really hard for most women to be friends with each other for very long; besides jealousy. I commend Oprah and Gayle for having a trusting friendship for this long. Many women would love to have a genuine friendship as this. I wished them both the best.

Janice Baker – Women always remember never tell your friends how good your husband is to you, especially in the bedroom.

Laverne Jones – Ladies, you don’t have to tell your friends how good your husband is….they can see it…it’s just the whorish and jealous kind of women who does things like this

Anisha blackwell – I get that but as a Friend, she shouldn’t be sleeping with my husband. Her friend was a jealous low down heifa and her husband was probably jealous of her success too so as a sl-ap to the face they decided to hum-iliate and hurt her by sleeping together at her home…Triflin