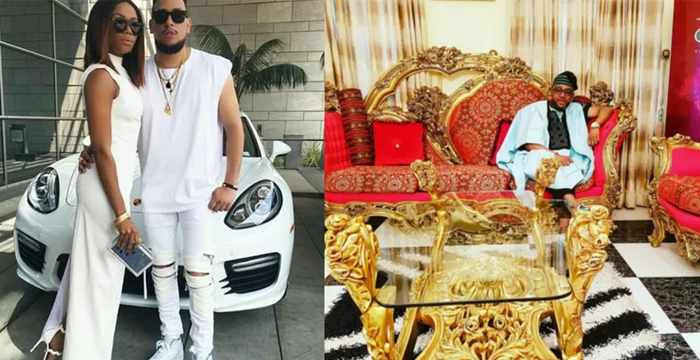 The rich kids of Instagram never disappoint when it comes to flaunting their extreme wealth on social media. But it’s generally young people who hail from the UK, the US and Russia that are known for showing off their private jets, designer clothes and luxury holidays. Now, however, they’ve got some stiff competition from the wealthiest young people in Nigeria – Africa’s biggest economy – whose exploits are documented by the Richkidsnaija Instagram account.

Emeka Okonkwo, known as E-money, is the country’s youngest billionaire through interests such as property, oil and gas and his own record label. A billion Nigerian Naira is the equivalent of around £2.5 million in the UK. He owns multiple properties in Lagos and have kitted them out in lavish style with elaborate gold furnishings. His party trick is to spray cash on the guests from a money at weddings.

A video from earlier this year, shows him spraying one million Nigerian dollars – the equivalent of £2,500 – on guests at the marriage of actor Mike Ezuruonye’s sister. Rapper and designer Bayo Adewale AKA Bnaira is also fond of throwing cash around at parties.

He became known for his love of red cars while studying geography at the University of Lagos and worked his way up from a Honda Accord to Ranger Rovers and supercars with personalised plates in his signature colour.

Louboutins are hugely popular among Nigeria’s wealthiest young men with both Hushpuppi and Mompha showing off their huge collections. Mompha, who is the CEO of a Lagos Bureau De Change, boasted that he has ‘lots of them like coupons’ and is ‘drowning’ in a red sea of their distinctive soles.

He also showed off his bags from a shopping spree at Gucci, Cavalli, Valentino, Versace, Hermes and Louis Vuitton, making his followers aware that he’d paid for the luxury haul in cash.

Meanwhile HushpuppiI proudly announced that he had been invited to an exclusive preview event at Versace. ‘None of you nuisance, noise makers was invited,’ he said. ‘To God be the glory, it was a successful event and I had a wonderful experience, met worthy people of great class. ‘Of course I made a purchase of one jacket with a huge price tag.

‘These jackets are not going to be available for the general public and they will never be made after this event. ‘They are once in a life time exclusive pieces and of course I only like it if it’s one of a kind, cos I don’t work with crowd mentality and I’m not built to be a champion in a local market.’ He’s also boasted about spending a million Naira on a new Versace man bag, the equivalent of £2,500.

Isaac Okoboh – Congratulations to this great guy making it big and making his village and tribe very proud. I am very happy for you. Keep it up.

Inspiring Others – Inspiring story and to think that he didn’t have transport after his traditional marriage; finding such a woman is indeed a blessing.

Chikezie Justice – Big brother I really thank God for you and I pray that more grace and more money in your Bank account.in all I pray to be like you God bless you and your family’s Amen.

This Article Was First Published on  dailymail.co.uk