Father And Son Make History As They Graduate Tx. P-olice Academy Together: ‘It Gave Us A Bond’ – Video 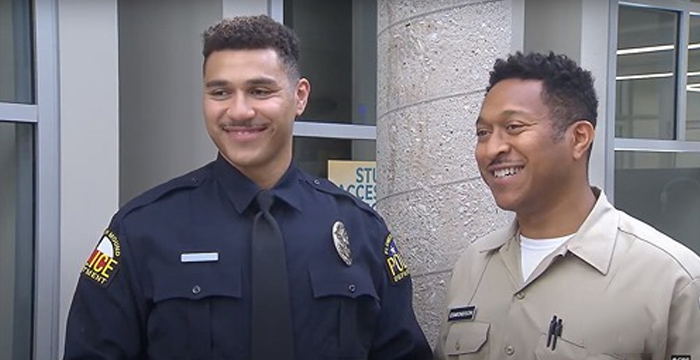 A father and son have left their mark on a Texas p-olice academy after they graduated from the program together. Winston and Christian Edmondson both recently completed Tarrant County College’s Law Enforcement Academy, marking the first father and son duo in recent memory to graduate from the academy together, CBS affiliate KTVT reported. “As we all know, officers are entering a very turbulent time in our society and it was very refreshing that a father and son duo wanted to actually come,” Damon Ing, a member of the Tarrant Law Enforcement Academy, told the outlet.

According to Winston, his decision to become a officer was a long time coming, and something he hoped would ultimately become a family affair. “I had been thinking about getting into law enforcement and I had been encouraging both my sons to get into law enforcement,” he explained to KTVT. After he and Christian decided to join the academy, the two said they found themselves pushing one another to be better.

“My dad and I are really competitive,” Christian told KTVT. “This academy was good for both of us, I think, because it kinda gave us a bond.” Added Winston: “There were a few times I got the better of him. Not often, but hey!” Though they graduated side by side, the father and son may be going separate ways in their careers, as Christian was officially sworn into the Flower Mound Po-lice Department on Thursday, while his dad continued to consider offers, the outlet reported.

And surprisingly enough, the Edmondsons weren’t the only ones to grab attention at Tarrant County College’s Law Enforcement Academy graduation. William Shaw also left his mark by completing the academy at 61-years-old, according to KTVT. Shaw, who went on to be sworn into the Grapevine P-olice Department, told the outlet of his accomplishment, “It doesn’t matter the age. If you can push yourself and persevere, you’ll get there.”

Mary Firebaugh – Congratulations to you both. Prayers for peace and protection as you take on this endeavor. How wonderful to have you both be the peacemakers and protectors of us. Thank You.

Deborah Wichelt – Congratulations to both of you and this will be something both of you will be able to talk about it with others and can be happy for each other. God bless both of you.

Martha F Tolbird – Congratulations. I’m sure law enforcement can use 2 good men. Stay strong and be careful. There are lots of people that support our law enforcement 100%.

Gasper Ole Loibor Mollel – Congratulations you have reached that point because of the good foundations laid by your ancestors. We are what we are because of those who preceded us.

Janet N Dan Carstensen – So grateful that you each chose this avenue to risk your lives for all of us! May God keep you safe and give your families peace every day you’re out there vulnerably helping!

Deborah Hamel – Thank goodness there are still good people ready to stand up and defend and serve We The People! Thank you both for your willingness to serve and congratulations.