Fake Vs Genuine People: 8 Ways To Identify Them 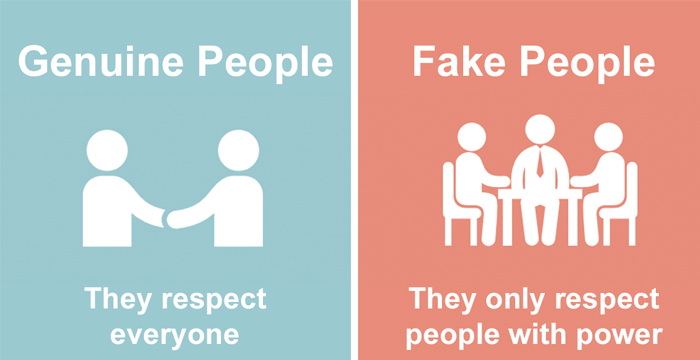 How can you tell a genuine person from the one who’s just being fake nice to you? You can literally sink hundreds of hours into books about human psychology or try to figure out the various types of personalities, or… You can check these eight illustrations that might give you an idea about the differences between fake people and genuine people. The guys at Lifehack have come up with a shortlist of 8 main differences between these types of people. And while we don’t recommend you start judging everybody and shouting ‘people are fake’ in the streets, some of them sure seem spot on. From the way some people act in bigger crowds to the way, they keep their promises; these examples tell it all.

Now scroll down below for these pieces of wisdom and may your skills for differentiating fake friends and a genuine person evolve.

1. Genuinely nice people respect everyone, not just people who are cool or powerful.

3. Fake people gossip about others.

4. Fake people are only helpful when they have an agenda whereas genuinely nice people are helpful almost always.

5. Genuine people might talk about their achievements but they don’t show off or brag.

6. Fake people often try hard to be liked, whereas genuine people are just themselves.

7. Genuine people always try their best to stick to their commitments and promises.

Michael Bell – It’s getting hard to trust people these days I guess it’s better to be a loner.

Nadia Subri – Unfortunately 99.99 % of people are fake. 1 % left usually are the unlucky genuine, who keep getting in trouble for being genuine.

Dave – Fake ppl can’t forgive someone because their secret agenda was more important than the relationship.