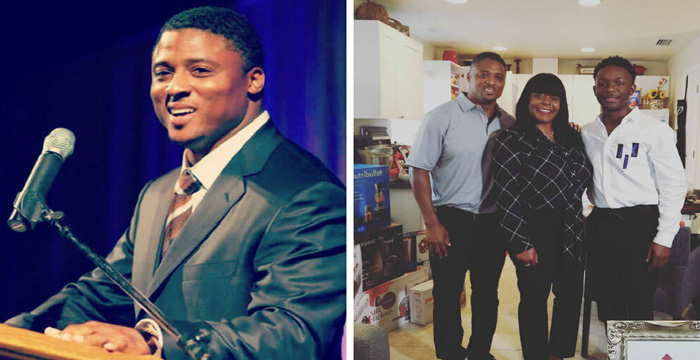 While former Tampa Bay Buccaneers player Warrick Dunn has long since retired from professional football, he has still found a way to bring smiles to families in Florida. Through his nonprofit, Warrick Dunn Charities, and a partnership with Habitat for Humanity, Dunn gifted single mom LaToya Reedy and her 18-year-old son a fully furnished two-bedroom home located in St. Petersburg on Tuesday, according to the Tampa Bay Times.

“Being a homeowner now, I can be at home,” LaToya, 39, told the newspaper after walking into the home for the first time. Before receiving the keys to her new place, Reedy was struggling to pay the bills as a nursing assistant. For two years, she and her son, AnTrez Reedy, rotated sleeping on the bed in the bedroom they shared at her mother’s house.

“I can be at peace,” she told the Times of the special moment. “I can bring sweet memories to my house and I can have my family and my friends over. I have a home now, and that’s something that I’ve always wanted for my son, and for myself.” “It’s been a long, hard journey,” LaToya added. “Struggle and sacrifices, but we made it.”

But this isn’t the first time that 44-year-old Dunn has helped a single mother into their first home. In fact, LaToya is now the 173rd recipient of a home presented by Dunn’s foundation. The former football star was inspired to help other single mothers after his mom. After that, Dunn cared for his five other siblings, taking up the many responsibilities his mom had held as a single parent.

Former Bucs and Falcons RB Warrick Dunn helped a single mom in Florida get a fully furnished home through Habitat for Humanity.

“You have no choice but to mature. It wasn’t just about going to school and playing football anymore,” Dunn previously told PEOPLE. “My life became about five people.” “She was compassionate, she was kind, she was helpful, thoughtful,” he added. “She was everything that I would want in my wife.

I consider my mother to be superwoman.” According to the Times, Dunn always leaves a memento in the homes he’s donated that reminds him of his mother — an apple pie, which was her favorite. “I’ve used this program as therapy,” Dunn told the newspaper. “Every time I hand over those keys there’s a little piece of my mom and the things she wanted.”