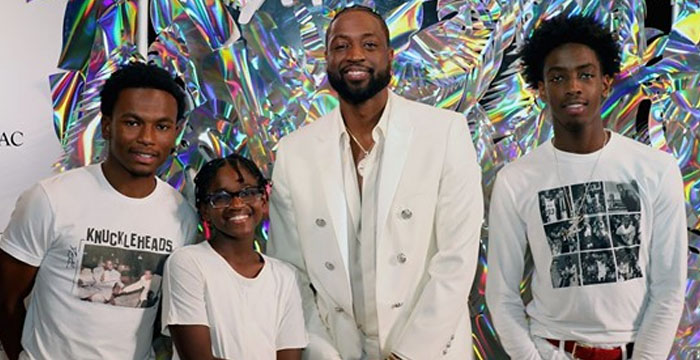 “Enough Said,” proud papa Dwyane Wade captioned a photo Zaya. Holding a bouquet of flowers, our fave is clearly living her best life as she smiles from ear to ear. How sweet! See other endearing moments from the pre-teen Dwyane Wade and wife Gabrielle Union are “proud LGBTQ+ allies.” In case you missed it, yesterday the world was officially introduced to the former NBA player’s 12 year old and her new identity as Zaya (previously known as Zion). Keep scrolling to see why she is winning the hearts of many.

Just like in this Christmas portrait, Zaya is not afraid to stand out, even if her choices are not always met with positive responses from the public.

Thankfully, Zaya is not afraid to lean on her dad for support. “Me and my wife, Gabrielle Union, we are proud parents of a child in the LGBTQ+ community and we’re proud allies as well,” Dwyane said on an episode of The Ellen DeGeneres Show. “We take our roles and responsibilities as parents very seriously.”

“What’s the point of being on this earth if you’re gonna try to be someone you’re not It’s like you’re not even living as yourself, which is like the dumbest concept to me,” Zaya said in a video posted by supportive step mom, Gabrielle Union.

“Even through hard times, you gotta push through. It’s worth it when you reach that point of yourself.” According to a post by his loving step mom on Twitter, Zaya’s “compassionate, loving, [and] whip smart.”

While we feel as though this goes without saying, we’ll say it anyway. Zaya has some serious style!

We can all stand to live by these words by Zaya: “Like, be true and don’t really care what the stereotypical way of being you is.

Dwayne Wade and Gabby Union supporting young Zion at Miami Pride is so beautiful, I could cry. I can’t imagine having had this type of support as a kid (or even young adult). Amazing example of living in and showing unconditional love ? pic.twitter.com/2cT8Ow6kik

Zaya is also an amazing best friend to her protective big brother, Zaire. “I don’t care what they think Z, you are my best friend and I love you kid,” Zaire shared on Instagram before adding, “If it means anything, just know there’s no love lost on this side.”

Zaya always seems down for a good family photo. I looked at her and said, ‘You are a leader. It’s our opportunity to allow you to be a voice’,” Dwyane said during his The Ellen DeGeneres Show interview. “Right now, it’s through us because she’s 12 years old, but eventually it will be through her.” She is catching it.