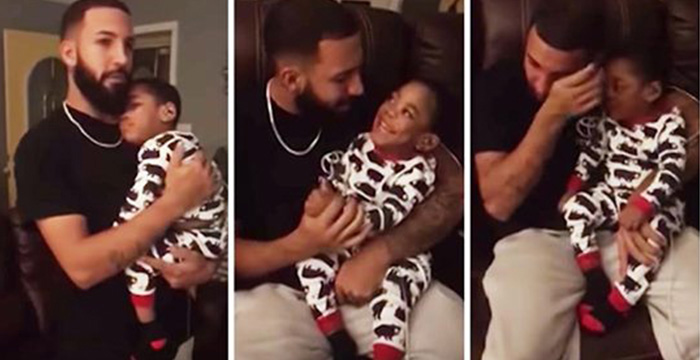 One dad recently demonstrated just how immeasurable the power and relativity of music is when he simply sung his child a song. Music’s universal power is perhaps due to it being based purely on the senses. Neither listener nor maker needs any credentials to simply be in the moment with the music. That’s exactly what happened when Zach Oxendine of Lumberton, North Carolina decided to sing a song to his two-year-old son who is deaf.

According to The Mirror, Judah Oxendine hasn’t had an easy go at life so far. At just 23 weeks gestation, Judah was born premature, and he weighed less than two pounds. Atop all the usual risks associated with premature delivery, he also had a life th-reatening brain bl-eed. He survived, but he’s since been diagnosed with other disorders including cerebral palsy, lung disease, and a severe hearing impairment

When Zach belted out Lee Bruce’s song “Boy” while holding Judah in his arms, something magical happened that brought the loving dad to tears. Young Judah looked up at his dad and offered the most genuine, heart-felt smile. Despite his hearing impairment limiting his ability to hear the music, Judah likely felt the vibrations from his dad’s body as he sung. As you can see in the video, it’s nearly impossible for dad to hold it together to get through the song once he sees his precious boy’s smile.

Zach told The Mirror that “Boy” has always been a special song for him. He could relate to it, and it’s words touched him during a trying time in their lives. He played it repeatedly after getting news Judah would have to have another operation. It made him cry, but it also helped him realize his family’s strength. He wanted to share that sentiment with his son.

His son’s smiling reaction made him feel like Judah was trying to confirm that sentiment, too. He told The Mirror: “When he looked up at me, it was if he was saying everything was going to be okay this is just a storm in life that will soon pass and we will one day be thankful for it – that’s what I got from that smile and I just couldn’t contain myself.”

Wanda Nwokocha: “Keep showing him al that love, you will always get that priceless smile.”

Becka DeShone: “He may not be able to hear, but he can feel, and that is the most powerful form of site there is.”

Marsha Kay Erving Presley: “My precious sister hasn’t heard much with her ears since she was born but for 72 years she has been listening with her heart. God, please bless and keep her.”

Deanna M Duke: “She shouldn’t be pushing him, he’s clearly uncomfortable with the camera on him. This is so sweet, kind and loving but some moments are for you only fathersonbond awesomedad”

Lou E Campbell: “That’s great! I know the deaf can feel the vibrations. I’m sure that is what Zach’s son could feel . That was why he smiled at his dad. Very sweet!”

Lieschen Goff Metzger: “That’s kinda the best feeling in the world when your kid lays on you like that and presses their face to your neck.”

This article was originally published on the apost.com