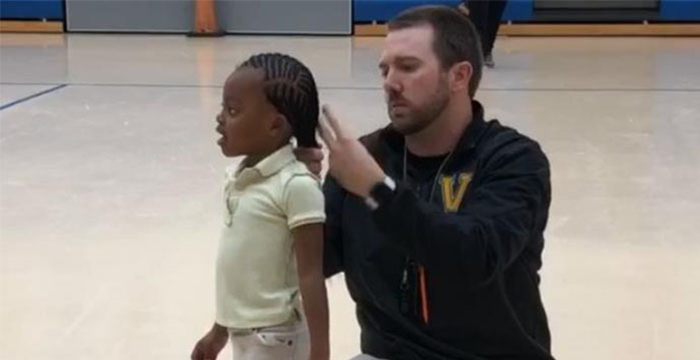 A video showing a Georgia phys ed teacher putting his student’s hair in a ponytail is sure to brighten your day. Jonathan Oliver was filmed as he paused in gym class to assist kindergartner Kristen Paulk at WG Nunn Elementary School in Valdosta. The sweet moment was shared on social media by the assistant kindergarten teacher, Kandice Anderson who wrote, “When your job goes beyond teaching
Get GMA delivered to your inbox every morning Sign up for our daily newsletter.

By providing my email address, I agree to the Terms of Use and acknowledge that I have read the Privacy Policy The footage, which was posted two weeks ago, garnered over 3 million views. Kindergartner Kristen Paulk, left, is photographed with her sister, Claire Cleckly in an undated family photo. Kristen appeared in a viral video while her teacher Jonathan Oliver put her hair in a ponytail during gym class.

To me, it was just a ponytail. “It was shocking to me that it got that much attention because we all do it,” Oliver, 34, told “Good Morning America,” adding that he didn’t realize he was being filmed. “We [teachers] want to make them feel like they’re at home and that they enjoy being here,” he added. “We try to love on them as much as possible.

To me, it was just a ponytail.”P.E. teacher Jonathan Oliver was filmed while putting Kristen Paulk’s hair in a ponytail at WG Nunn Elementary School in Valdosta, Ga. Oliver, a dad of three, said Kristen approached him asking to put a ponytail in her hair during a basketball activity. Oliver often styles his daughter’s hair, but said his expertise doesn’t go beyond ponytails.

Jonathan Oliver, who is pictured with his family, recently appeared in a viral video while while putting his student’s hair in a ponytail at WG Nunn Elementary School in Valdosta, Ga., where he works as a physical education teacher. “It was a good thing she asked for a ponytail,” Oliver said, laughing. “Anything else, I’d say, ‘You better ask your mom.'”

“I always know that Kristen is in very good hands with him,” Cleckley said of Oliver. “I thought it was really cute because her father he does their hair a lot. We have five girls and one son so when I’m working he has to pick up the weight of doing their hair.”

This Article Was First Published On goodmorningamerica.com