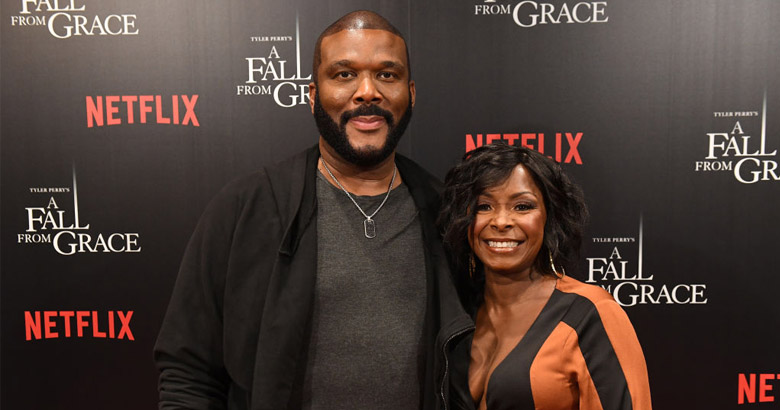 Crystal Fox is weary of the ways of the Internet. The 56-year-old, who most recently starred in Tyler Perry‘s hit Netflix film A Fall From Grace, portraying the titular character, and is the star of his hit OWN series The Haves and the Have Nots, talked to the Los Angeles Times about why she continues to work with the writer/producer/director/actor on his projects, despite the grumblings of those who find the work to be lowbrow.

“Tyler says he writes about people he knows. I know the same people,” she said. “These women are the aunties, mothers, sisters, cousins, our neighbors. That is what’s so interesting to me.”

So she had no qualms with calling out people who say that the Black experience showcased in his films and shows is stereotypical or filled with unhealthy, unproductive depictions of Black women. Like Perry, she says just because the experience may not be yours doesn’t make it an invalid one.

“Some of the people that are criticizing it, it’s so frustrating because I want to say, ‘If you’re blessed to not know these people…’ But no, I feel we’re blessed to have known these people and I see those women in all of his writings,” she said of characters like Grace. “The frustrating part for me is that a lot of times they criticize what these portrayals are, and I’m not sure if they don’t like the acting, or do [they] not like us telling that story? Now, if you don’t want me to tell that story, that hurts my feelings because it’s like you want me to discount people I know.”

Fox believes that if some people aren’t fond of the stories Perry shares, they should step up and write their own, because there are plenty of platforms out there now to share and create them — including the historic and massive studio he just opened in Atlanta.

“Don’t be mad at Tyler because he is finally speaking for those of us that have had no voice,” she said. “If you don’t like it, tell another story. Why are you expecting him to be the one person to tell all the stories?”

“Celebrate the fact that there’s a platform — and honey, that studio is a game changer,” she added. “People rent out soundstages all the time. Pick up your pen and paper, write your own story for us, about us and go do it at the studio, in one of those 12 soundstages. We need all of our stories told.”

She does have a point there. Nevertheless, check out the wide range of opinions people have shared online recently about Perry’s projects, from A Fall From Grace to The Oval, Sistas, The Haves and the Have Nots and more. Some love it all, and some? Well, not so much:

This article was originally published on madamenoire.com