Couple Adopts 3 Children From Foster Care, Then A Neighbor Steps In And Calls Child Services – Video 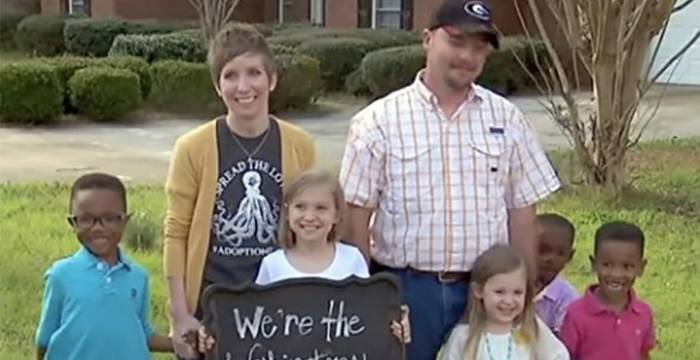 In all likelihood, siblings Michael, Jess, Camden and Elijah would have spent their formative years in far-flung foster homes, never having the opportunity to grow up and play with one another. But the trajectory of all their lives changed the moment one couple stepped in. Georgia residents Julia Washington and her husband, B.J., already had two biological children. But almost as soon as they discovered what lay in store for Michael, 6, Jess, 5, and Camden, 4, they knew they had to do whatever they could to keep the siblings together.

Turns out the three boys had a fourth brother that they didn’t even know about, 17-month-old Elijah. “We knew that to go from two to five children, and then one that has major special needs, that somebody was going to suffer … (but) if we didn’t adopt him, he’d be over 1,000 miles away,” Julia said.

So she got to talking with her neighbor and close friend, Jay Houston. As the youngest of seven children, and having been adopted herself, Jay understood Julia’s concern.

In an amazing act of compassion, this mother – who already had two biological children and four adopted children of her own – worked out a solution that, to most of us, would be completely unimaginable.

DANA williams – Now that was a Blessing from God that was setup for the brothers to be near each other and still grow up together.

Anza Smith – That last story really got to me as I’m homeless and my van just broke down. Its amazing that she had so many people help her!

Cristy Luv – Since when can you only adopt three children??? And what kind of ship is being ran to allow siblings to be separated even if there’s a family willing and able to adopt all of them??? The most idiotic thing Ive heard this week