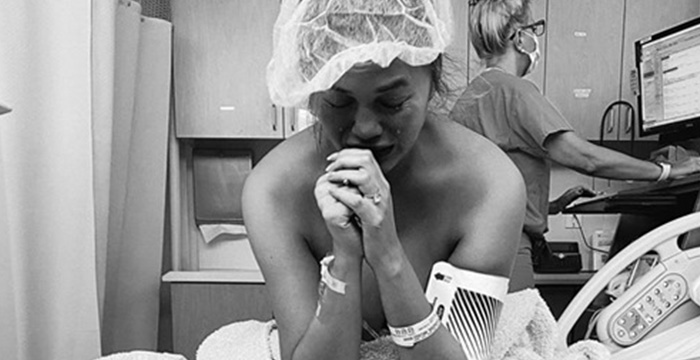 Chrissy Teigen has opened up about suffering a second-trimester pregnancy loss in September in an emotional essay. In the essay published on Medium, the “Cravings” cookbook author penned a account of what happened the day she lost her son — who she and her husband, singer John Legend, had named Jack — at 20 weeks and how she’s been coping with the grief.

“I was about to fully deliver what was supposed to be the 5th member of our beautiful family, a son, only to say goodbye moments later,” Teigen wrote. “People cheered and laughed right outside our door, understandably for a new life born and celebrated. You kind of wonder how anyone is thinking about anyone but you.” In late September, the 34-year-old, who announced her third pregnancy in August, was admitted to the hospital.

Teigen wrote that she had to deliver her second child, Miles, a month early because his stomach wasn’t getting enough food from her placenta, but this was her first abruption. “We monitored it very closely, hoping for things to heal and stop. In bed, I bled and bled, lightly but all day, changing my own diapers every couple of hours when the vital fluid got uncomfortable to lay in,” Teigen wrote. “I was still seen by doctors at home, silently twisting their negative words into positives, thinking that everything might still turn out okay.

Finally, I had a pretty bad night in bed, after a not-so-great ultrasound.” After more nights at the hospital, Teigen’s doctors broke the news. “He just wouldn’t survive this, and if it went on any longer, I might not either,” she said. “Late one night, I was told it would be time to let go in the morning. I cried a little at first, then went into full blown convulsions of snot and tears, my breath not able to catch up with my own incredibly deep sadness.

Even as I write this now, I can feel the pain all over again.” On Sept. 30, Teigen shared her pain and grief with her 32 million Instagram followers in several raw, black and white photos. While the post was flooded with support, some questioned Teigen’s rationale for opening up about the experience with photos. Teigen addressed why she needed to have these moments captured. “I had asked my mom and John to take pictures, no matter how uncomfortable it was,” she wrote.

“I explained to a very hesitant John that I needed them, and that I did NOT want to have to ever ask. That he just had to do it. He hated it. I could tell. It didn’t make sense to him at the time. But I knew I needed to know of this moment forever, the same way I needed to remember our tears of joy after Luna and Miles. And I absolutely knew I needed to share this story.” “I cannot express how little I care that you hate the photos. How little I care that it’s something you wouldn’t have done,” she continued.

“I lived it, I chose to do it, and more than anything, these photos aren’t for anyone but the people who have lived this or are curious enough to wonder what something like this is like.” Since her ordeal, Teigen said she has received an outpouring of support from many on social media and thanked everyone for their kindness during these tough times. She said she was sharing her story in order to help her cope and move on.

“All I know now is his ashes are in a small box, waiting to be put into the soil of a tree in our new home, the one we got with his room in mind,” she continued. “People say an experience like this creates a hole in your heart. A hole was certainly made, but it was filled with the love of something I loved so much. It doesn’t feel empty, this space. It feels full.”

“I wrote this because I knew for me I needed to say something before I could move on from this and return back to life, so I truly thank you for allowing me to do so,” said Teigen. “Jack will always be loved, explained to our kids as existing in the wind and trees and the butterflies they see.” Teigen has never shied away from personal topics, having previously discussed her infertility treatments.

Just as those revelations prompted others to talk about their own experiences, her forthcoming approach to her pregnancy loss is a “gift for women,” according to Dr. Nita Landry, an OBGYN in Los Angeles. “To a lot of women who never came forward and spoke about it, she’s saying, ‘It’s OK to feel what I’m feeling. This is normal,'” Landry said in September. “Until we can have those open, honest conversations, a couple things will happen: No. 1, there will continue to be misinformation, and No. 2, women will continue to suffer in silence, which is unacceptable.”

Sally Woodley: “I Feel bad for Christy andd John my heart goes out to them ,I just want to hug them b9th..This is a Deeply personal matter . I dont think I would have the strength to discuss it with anyone else than very close friends.”

Heather Muscat: “GMA, retract your support for Botox while pregnant! Clearly more research needs to be done before its promoted to treat pregnancy headaches!”

Holli Anzalone: “It’s BRAVE and BEAUTIFUL for her to share her experience, regardless of what some think of it. It’s only when you shine a light on these stories do you end the stigma and shame so many families needlessly endure.”

Lydia Martinez: “My heart goes out you Crissty for sharing your story I lost my first born son 35 years I went through it alone & I blamed myself for the loss God bless you Always.”

This article was originally published on the goodmorningamerica.com