Cardi B Slams R-acist Response To Her Birkin Collection: ‘Ya’ll Don’t Do This To White Celebrities’ – Video 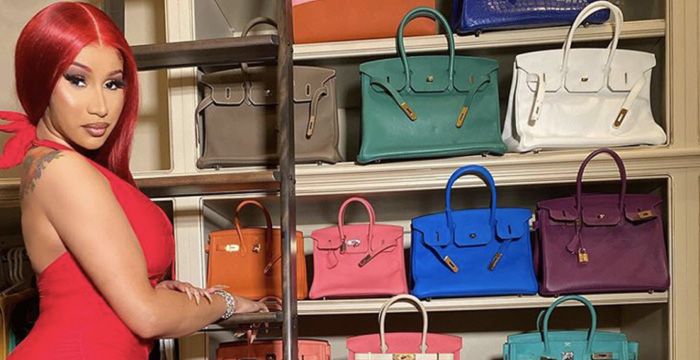 Cardi B is sounding off on comments about her collection of Hermès Birkin bags, calling out a social media post that claimed the purses are “supposed to be exclusive” but have “literally lost their value” now that black female rappers carry them. “I’ve been seeing this tweet that had me and it had other female rappers on it,” the “WAP” rapper, 28, said in an Instagram video on Monday.

“They were talking about if we could get Birkins from the Hermès store and it was also saying how we depreciate the value of a Hermès Birkin bag.” Birkins typically start at around $10,000, but can retail for upwards of $200,000 depending on color and materials. Continued Cardi, “I find that really interesting, right? Because first thing first, I definitely could get a bag.

Actually, I got four bags today from the Hermès store. I don’t wanna brag but it’s like, don’t even try it.” The Grammy winner took particular issue with the poster’s bias. “Why is it that y’all asking female rappers if they could get a bag from the Hermès store? Y’all don’t do this to these white celebrities,” she said. “So why is it that y’all gotta be asking us?” Cardi went on to point out that rather than depreciating the value of luxury goods, rappers often send sales for designer items soaring.

“We add value, because in hip-hop, when we mention brands in hip-hop, that s—t go up,” she explained. The superstar pointed out how her single “Bodak Yellow” generated a massive search and sales spike for Christian Louboutin’s “shoes,” while her mention of Balenciaga in “I Like It” had a similar effect — and even landed Cardi her own campaign for the fashion house.

“Hip-hop, we start trends. When y’all say that we devalue s—t, no we actually add value,” she asserted. Cardi also condemned those who would doubt a Birkin’s authenticity based on its owner. “Why when a black girl, why when a Hispanic girl [has] a bag, y’all have to question it?” she asked.

“There’s a lot of bossass out here. There’s realtors, there’s PRs, there’s A&Rs, there’s doctors, there’s dentists and the list goes f—king on … That’s getting money out here.” But fans shouldn’t feel bad if they can’t afford Hermès, Cardi said. “If you’re a regular girl, you don’t gotta break your neck to have a Birkin. A Birkin don’t make you,” she added.

“Don’t ever feel like you gotta compare yourself. Don’t compare yourself to nobody [on] the internet. This internet s—t is fake.” Cardi’s husband, Offset, defended her points and shared a similar message on Instagram as well, posting a photo of his wife and a few of her many Hermès bags. “Stop letting people on the internet tell ya’ll who can get a Birkin at the store, and how many Birkins you can get,” the 28-year-old Migos rapper wrote. “Black people having access to luxury shouldn’t be a debate…by the way hiphop starts the trends !”

Shondra Scott-Barrett: “Truth is white celebrities don’t act like black celebrities do when they get a little piece of something. What white celebrity do you know that flaunts like we do? I I’m not saying it’s not white to be happy about the things you can get but we always act like we have never had anything and we just get so excited. But to others of us it looks like bragging and those are the “supporters” who have issues.”

Albany Blakemore-Lewis: “She right though The real housewives of Beverly Hills have all the birkin bags and nobody says squat to nor about them!”

Barbie Garrett: “I don’t understand why people do this. What a rich person is doing with her money has nothing to do with any of us. Our opinions don’t pay her bills. And minding her business doesn’t pay ours.”

Ariana Alexandra: “I really wish people would read the articles instead of spouting whatever random thought they get from title. She really didn’t say anything a sensible person would disagree with…”

This article was originally published on the pagesix.com, people.com