Blac Chyna Claims Kardashian’s Would Be Called Ghetto If They Were Black, Because They’re All Baby Mamas In Instagram Story 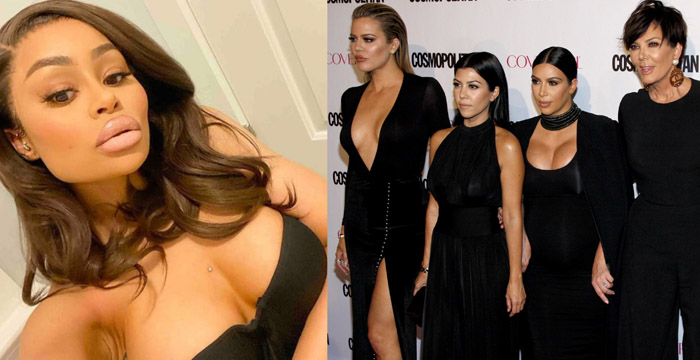 Blac Chyna has had a long and storied history with the Kardashian clan. The former video vixen turned social media mogul was once friends with the sisters, but a series messy circumstances lead to them no longer being on speaking terms. Recently, Chyna took to her social media to share some thoughts on Kim, Kourtney, Khloe and Kylie and some of the double standards they benefit from as non-bl=ack women in pop culture. Blac Chyna and Kim Kardashian began hanging out back in 2013. At the time, Chyna was engaged to rapper Tyga with whom she shares a child. Things got complicated when Tyga left Blac Chyna to date a then 17 year old Kylie Jenner.

This clearly led to a falling out between Chyna and the family. Chyna went on to publicly blast the couple over the years, taunting them on social media and posting texts from Tyga asking to get back together. In a twist right out of a television show, Chyna eventually began dating Kardashian brother Robert. The two quickly got engaged and eventually had a child together and starred in their own reality show Rob & Chyna before seprating.

It had appeared that during their union Chyna and the family had made up, with her and Kylie even posting together on Snapchat. However, Chyna took to her social media today to point out a glaring discrepancy in how she is treated verses how the Kardashians are viewed by the media. Despite 4 out of the 5 girls all having kids and no longer being with their child’s fathers, they are not looked at as negatively as mothers who are separated from their baby daddy’s.

Under a picture of the sisters posing and smiling together she wrote “If they were they’ll say its ghetto but all of them are baby mamas” with a thinking emoji. The Shade Room reposted the story post and fans were very vocal in the comments section. “Girl you literally gave birth to a kardashian. It’s a lil late to bash em now”, said one. Another pointed out Y’all keep saying did she lie but I’m trying to figure out what that had to do with anything”, since the post seems unprovoked. “Bitter and mad asf that these ladies don’t care about her but still loves her child and treat her baby like they own.”

Lerato Mosala – Well she’s right though, their baby mamas except for Kendall.

Chris Tina – I get where she’s coming from but c’mon she has a daughter now- that is her family too- her aunts her grandparents… blac chyna is like that bitter baby mama that keeps the kids away from the family .. blac chyna knew what she was getting in when she slept w rob and now she wants to be their enemy … if she had class she prob could have rekindled those friendships again.

Kelly Traylor-Thrasher – Well, not all…Kim was married when she had all of her children, as was Kris…the others fit the definition of a baby mama

Sean Manning – The Kardashian women build an empire, they don’t have multiple baby daddies, and they’re not mooching off the system like a lot of ghetto ratchets do and like she’s trying do all because she got pregnant with Rob’s baby. She thinks that she’s entitled to apiece of their fortune and she isn’t a baby is not an paycheck.