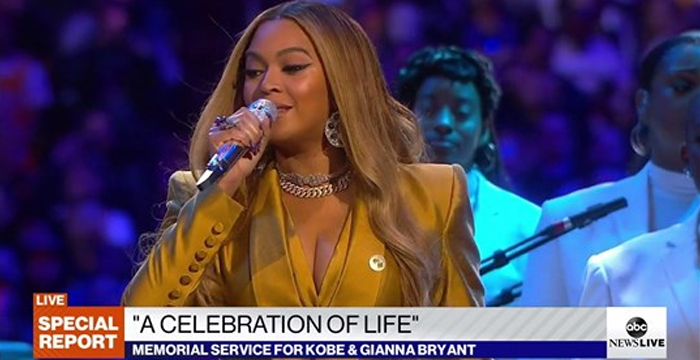 Beyoncé opened the public memorial service for kobe bryant and his daughter gianna with a powerful performance of “xo” and “halo.” Flanked by a small choir and backing band, beyoncé started with the opening lines of “xo,” before pausing the track to address the audience: “I’m here because I love kobe, and this was one of his favorite songs. So I want to start that over but I want us to do it all together, and I want you to sing it so loud that he’ll hear your love.” she then resumed the track from her 2013 self titled album before deftly transitioning into her 2008 ballad “halo.”

Following beyoncé’s opening performance, jimmy kimmel was announced as the event’s host and told the crowd in a tearful speech: “today we are joined by kobe’s teammates and opponents, alike, his friends, family, and fans as we try to make sense of what happened to these nine beautiful people who were, by all accounts, so full of life, who left behind parents, friends, co workers, classmates, siblings, and children. I’ve been trying to come up with something positive to take far from this and it was hard because there isn’t much, but the best thing I was able to come up with was this: gratitude. It seems to me that all we can do is be grateful for the time we had with them, and for the time we have left with each other.”

Bryant’s widow, vanessa, then took the stage, opening her speech with a tribute to her daughter gianna, whom she remembered as “confident, but not in an arrogant way. She loved helping and teaching other people things. she was very much like her daddy, in that they both liked helping people learn new things and master them. They were great teachers she would hug me and hold me so tight, I could feel her love me.

Bryant was similarly sweet, funny, and somber when describing her husband, recalling his grand romantic gestures and calling him “the mvp of girl dads or mvd he taught them how to be brave and keep pushing forward when things get tough.”

In closing, bryant said of her husband and daughter, “they were so easy to love, everyone naturally gravitated toward them. They were funny, happy, silly, and they loved life. They were so full of joy and adventure. God knew they couldn’t be on this earth without each other. He had to bring them home to have them together.”

JUST IN: "I'm here because I love Kobe."

Beyoncé is performing at the public memorial service for Kobe Bryant and his daughter Gianna ''Gigi'' Bryant. https://t.co/KBW9iGN8Z6

Vanessa bryant remembers kobe at the celebration of life. Other performances included alicia keys, who played beethoven’s “moonlight sonata” on piano alongside a small string section, and christina aguilera, who sang schubert’s “ave maria.” keys had previously paid tribute to bryant while hosting the grammys, which happened to take place at the staples centers just hours after bryant’s loss.

In the wake of the tragedy, keys reworked her intro to pay her respects to bryant, bringing out boyz ii men for a rendition of their 1991 hit, “it’s so hard to say goodbye to yesterday.”

Bryant’s former lakers teammate shaquille o’neal spoke about the pair’s incredible run together when they won three straight nba championships in 2000, 2001, and 2002. He also acknowledged their sometimes tumultuous relationship, but noted that their friendship always endured. Comparing himself and bryant to john lennon and paul mccartney, o’neal said, “kobe and I pushed one another to play some of the greatest basketball of all time. And I am proud that no other team has accomplished what the 3 peat lakers have done since the shaq and kobe lakers did it.

This Article Was First Published On rollingstone.com