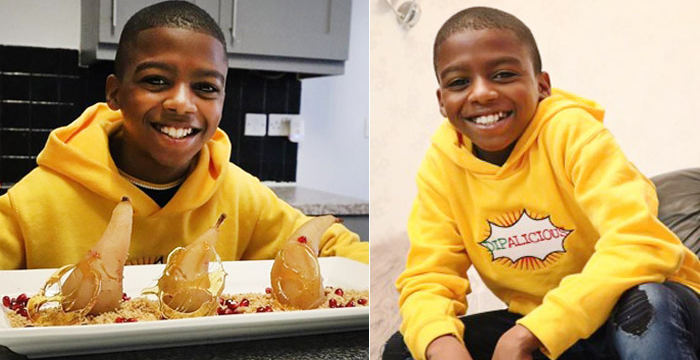 Putting us all to indignity is Omari McQueen, 11, who just opened his first pop up restaurant. The youngster wanted to become a chef after learning to cook while his mum fell ill with disable nerves. Despite being brought up on a meat based diet, Omari decided to become vegan after watching campaigner videos online.

His pop up boasts the finest Caribbean food made from plant based ingredients. The talented cook learns his recipes by watching Youtube videos and identifies his spices and seasonings by smell as he struggles with dy-slex!a.The mum even says that he even teaches her to make some of his tricks.

Omari’s pop up debuted in Boxpark, Croydon, after he contacted the park’s CEO and wowed him so much that he offered the space rent free for a week. He feels good about opening the restaurant. He is really exited about it. He has always wanted to become a chef.

He said that he is hoping that a lot of people will come to the restaurant and find it tasty. When his mum was sick and his dad had to cook, then it fell on his brother’s shoulders to cook, but he was not interested to cook either. So Omari then aged 7 stepped up to plate.

He wants to open a permanent restaurant in Boxpark. And he thinks that it will be real fun and many people will come to the restaurant. He added that many people will want to talk to him regarding the menu and he hopes that this will bring the people closer than before to him.

Food has the power to do that. His mom claims that the whole of the family will come to their help all the grannies and the aunts and the cousins will join hands in the project and make it a great success.