Aunt Mortified When Nephew Crawls In Stranger’s Lap, Her Reaction Is So Sweet – Video 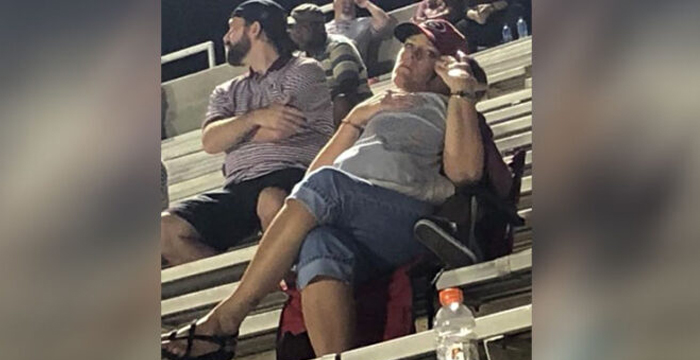 “I love her, and I don’t even know her!” No, this isn’t something a fan said about a celebrity online. This isn’t a “we’d be best friends if we met in real life” situation. This is what a Georgia woman said about a stranger that showed her nephew a little kindness. Earlier this week, Star Balloon-Bradley shared an update on her Social media page about a woman that she and her nephew, Isaiah, encountered at a high school football game.

Isaiah had befriended a woman at a home football game two weeks prior to Star’s social media post. According to his aunt, Isaiah walked up to the complete stranger, chatted with her, and ended up sitting on her lap — as if they’d known each other for years. The whole exchange lasted just 20 minutes before halftime, and the woman left the game to meet up with her daughter. At the following game, though, Isaiah jumped out of his seat with his aunt and ran over to a woman.

He’d spotted his new friend again! Star wrote in a now-viral social media post that before long, he crawled into her lap and put his head on her shoulders. “This lady patted and rocked Isaiah to sleep like he had given birth to him. It was the sweetest!!” Emb-arra-ssed, Star said she repeatedly apologized to the woman for Isaiah and asked if she wanted her to take him back but the stranger said that the little boy was “no bother” and that he was her “new friend.” In fact, she told Star that she only has one 15-year-old daughter, so “moments like these are priceless.”

Star ended on a poignant message to not “miss the simple pleasures in life” like this one. She continued, “I hate I didn’t get her name but I will next game because I’m sure Isaiah will make his way back to her.” People who saw the photo were quick to point out how wonderful and need it was — a bright spot in an often grim news feed. Miraculously, the power of the internet tracked the stranger down and Star revealed that her name is Mrs. Angela.

Mrs. Angela was overwhelmed with emotion from all the attention she was getting. She said that “Isaiah is absolutely adorable” and that she was “humbled by the kind words” she had received. Isaiah and Mrs. Angela’s friendship is a beautiful demonstration of kindness and love, even in the strangest of circumstances.

ThePortraitArt – This is great. But now imagine the child is a girl and the adult is a guy. I think this whole thing will take on a different tone, and the mom a whole different reaction. (“I think” is just being more neutral and soft, we all know it’s: “we know” that this is gonna be a whole different thing) Edit: to all the people who say this is a feel good story why u got to point out this and bummer everyone out. That’s like saying I’m warm, why can’t you let me stay comfy. “cuz your temporary comfort is supported by a forest f-ire that is coming your way” and eventually it’s gonna cause more problem (in this case, worse social problems for everyone). Better to deal and think about stuff like this while we still not on fi-re ye?

Alexis – This is a nice story but this kid needs to know more about “stranger dan-ger” you just can’t trust people. I feel that children are the most vulnerable because they have no m-alice but adults do.

Ashley Speaks – My child has Autism, non verbal, and was drawn to a man at a football game (the only man wearing Red at a football game where the colors were Blue and White and the other team was Green and black). My son sat beside him and he started talking to my him about the game. Just pointing and engaging, I just watched from a couple of aisles up. I started to approach them and the man held his hand up like, he’s fine, go sit down mama lol. It lasted the rest of the game and I kept watching them. After the game the man got up to leave and gave my son a high five. My son was also holding a pair of binoculars that the man was watching the game in. My son goes to hands them back to him (which was odd because when he loves something, he just does) but the man held his hand up again and said let him keep them. My heart melted. He just smiled and went away… That red jacket lol… And I mean you can see the cracks on the moon with those binoculars. A very expensive pair that he still loves today. Some people are earth angels.