An 18-Year-Old’s Prom Photoshoot Has Gone Viral After The Dance Was Canceled Due To The Pan-demic. 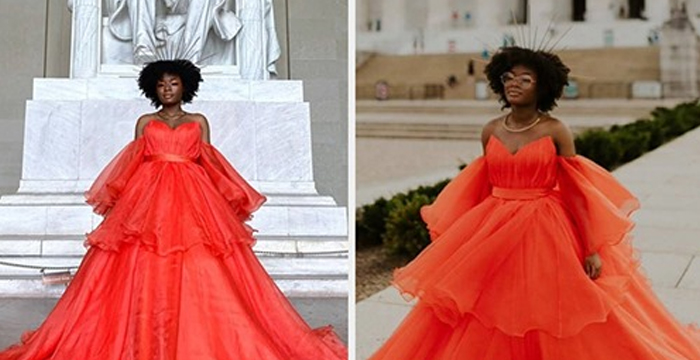 An 18-year-old is going viral for a stunning photoshoot she took part in after her prom was canceled.Jasmine Dauphine, from the Washington, DC area, told BuzzFeed News that she took “inspiration from Zendaya’s 2017 Met Gala look and SZA’s 2018 Met Gala look and I found the perfect dress online.” The teenager even made her own headpiece out of a headband and some zip ties.

Dauphine’s prom, which was supposed to take place in June, was canceled due to the COV-19. “At first I was OK with it because it was a COV-19 , and I still am okay with it!” she told BuzzFeed News. “But then I got really sad when I fully realized that I won’t be able to ever go to prom.” So Dauphine decided to put on her gorgeous red prom dress in the summer and had her sister take photos of her at the Washington Monument and Lincoln Memorial.

“I took this photoshoot because I still wanted to say I did something for prom and I wanted to bring a little joy to myself even if it wasn’t a whole prom event,” she said. And incredibly, an onlooker, who happened to be a photographer, asked the teen if she could also take a few snaps of her in the beautiful gown.

“I noticed Jasmine from afar and the creative in me was, like, OMG, I have to take a picture of her!” said Sara Isabella Ortiz, a 24-year-old wedding photographer who was visiting DC from Florida.

“I simply walked up to her and kindly asked, praying she would say yes.” “I am 10,000% certain she captured not only my attention,” she said, “but everyone’s attention that day with her beauty!” On Wednesday, November 25, Dauphine decided to tweet the photos, which have currently been liked more than half a million times on Twitter.

“When this went viral I was so shocked,” Dauphine said. “I think I stared at my phone for 10 minutes trying to comprehend the numbers that I was seeing. It was so crazy to me.” She also told the outlet that during Thanksgiving, her family kept praising her for her newfound viral fame.

Lisa Salcedo – MissMiss Jasmine, both you and your dress are STUNNING! I’m sorry COV-19 nixed your prom plans, but thank you for sharing your beautiful pictures with us. I do pray that you will get to wear that dress to an event one day soon! I love the powerful color and elegant lines of the dress, and your hair and skin were perfectly polished! You are an absolutely beautiful young lady!

Tobias Brandl – This really is/was a prom dress? She could walk with this at several runways/red carpets! And also a big heart to the photographer! She did an amazing job!!

A.j. Ferrell – I don’t even generally like this color and my jaw still dropped. She looks INSANELY GORGEOUS! Literally every single thing about this look is flawless. Prom wouldnt have been good enough for this look Anything less than a coronation wouldn’t have worked.

Samea Khan – Striking dress and how organised! Even at 45, I’m not organised enough to have sorted a dress 4 months in advance. At 18, I’d have run around on the day to find one

Jen Hamilton-Nettles – Prom? I am just sayin damn. It’s beautiful, but there would have been no room for anyone else on the dance floor . I didn’t read the article. Assuming she made it. Hella talented

Ashley Marie – So glad she did this; she should be seen and so should that dress! Beautiful!

This Article Was First Published on vt.co