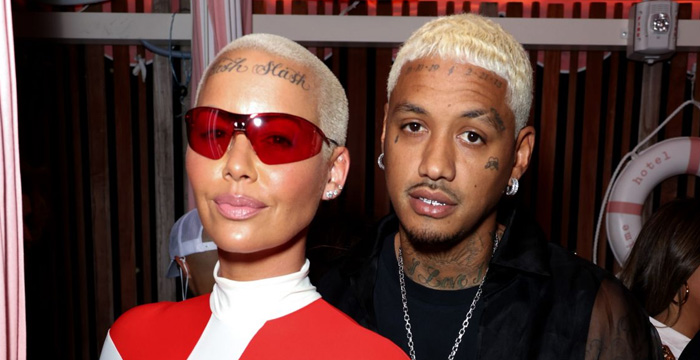 Amber Rose is putting her boyfriend and father of her child on blast for infidelity. The Slutwalk founder took to her Instagram Story and claim Alexander “AE” Edwards has been cheating on her with at least 12 women. “I’m tired of getting che-ated off on and being embarrassed behind the scenes,” she wrote in a series of Instagram Story posts on Wednesday (August 18). “All 12 of y’all bums (The ones that I know of there’s probably more) can have him. Y’all very much knew he was in a relationship with a baby and y’all decided to f–k him anyway.”

She added: “I saw all the texts and DM’s. Y’all were well aware but y’all don’t owe me any loyalty so it’s whatever.” Rose also claimed she would not expose the women who are cheating with her boo of nearly three years. “I can’t be the only one resolute for my family anymore,” she wrote. “I’ve been so loyal and transparent but I haven’t gotten the same energy in return. I’ll never say the girls’ names because I’m not in the business of ruining lives but y’all know who you are. As for him.

The lack of loyalty and the disrespect is ridiculous and I’m done.” In a follow-up post, Rose took turn at her mother, posting, “My raging narcissistic mom can get the f–k out of my life too. On my kids.” Rose shares 20-month-old Slash Electrick Alexander Edwards with AE. She also has another child, Sebastian Taylor Thomaz, 8, who is fathered by Wiz Khalifa.

Jenn – Sometimes it’s hard to keep scrolling past these posts and not comment. Amber is getting a too old not to see a pattern here. She needs to chill for a while and get to know her and what she really is about and want out of life. She’s putting herself in the position to be scrutinized and embarrassed.

Carmen Jones – So she stayed with dude for years, as he stacked woman on top of woman, had a kid with him, knew that he was cheating, but she mad at the women?! LOL! How are they the bums? You can put them on “blast.” You won’t ruin their life, you can only ruin yours.

Ruth – The person in the relationship is the one accountable to the relationship. Obviously people knowingly getting with taken people have questionable morals but they don’t have any obligations to other peoples relationships.

Ollie – Amber sis, he never wanted you. A man is not yours until he is married to you. And then he went on radio saying he just can’t be monogamous that’s a conversation that should have happened before opening your legs.

This Article Was First Published on bet.com