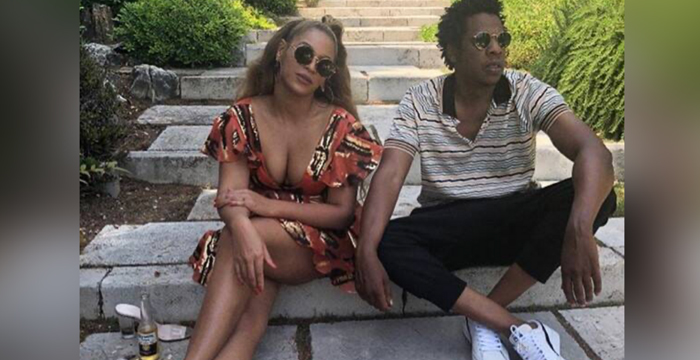 Akademiks usually has a lot to say when it comes to topics that happen in the Hip-Hop culture. The media personality is known to get on his Twitch platform to rant about a plethora of things, often exposing “insider information” on different celebrities. One of his latest rants is going viral as it speaks on relationships and relationship goals, as well as fans who idolize celebrity relationships. However, what made it more interesting is a hint at who “Becky With The Good Hair” could be.

Most of the clip’s ammo seemingly aims at Quavo and Saweetie’s recent breakup. Mainly, Akademiks takes his aim at the “Kevin Samuels” approach. The “Everyday Struggle” host referred to “broke Twitter h–s” who are money hungry and the men who seem to want them. “Stop putting stock into these BS relationships that are only for show,” he passionately exclaimed before stating that Saweetie and Quavo’s relationship was only for the “Best Friend” rapper to get a career.

Further in the video, Akademiks states, “Quavo and Saweetie have been beefing from what I’ve been hearing like b-loods and crips.” It’s to be noted that he has spoken on their relationship in the past, bringing Quavo to address Ak last year. “Pull Up And Chop It up Like a man I promise I ain’t gon hit you!!!” the Migos rapper wrote. “Jus wanna play u these new MIGOS records since u think s**t sweet! And stop bashin my girl. She’s a Female but if I tell her to go in yo s–t SHE WOULD so watch the trash word internet girl.”

Akademiks also offers advice to his fellow men who are looking to enter into a relationship. “Let me tell you this,” he begins. “If a b—h needs you to get a [MF] thing for you to be with her, send [her] back to where she belongs. And you’re hearing it from a [man] that can buy anything a [woman] can say.” DJ Akademiks further claims that he has “millions of dollars worth of cars,” which would be the first thing a woman who approaches him will notice. However, that does not mean that she is entitled to receiving any types of gifts, he says. He then advises fans who listen to certain rappers claiming to live a lifestyle of gifting random women with lavish things to either sleep with them, make them feel special, be in a relationship, or all of the above.

“I’m only telling ya’ll not to flex but somebody with money gotta tell ya’ll that,” said Ak. “Because if we listen to Lil’ Baby, and we listen to Future these days, and we listen to Moneybagg Yo, and even Uzi, they’re all saying ‘We’ll buy you the biggest Chanel! We’ll buy you t–ties, we’ll buy you this, we’ll buy you that.’ I told ya’ll that s–t is cap.” He added, “These n–gas are capitalizing off of relationships. The relationship is part of their image. So that’s why they’re rapping that way. But for the regular h–s you running into? All ya’ll chicks on Twitter can hate me like ya’ll want to hate me. B—h I make more than your whole family tree can make, and I won’t get you a bag.”

Fans who are quick to comment in the Shade Room about certain couples like Quavo and Saweetie also caught the wrath of Akademiks, referring to them as people who “idolize two people together, and believe in fictional things that don’t matter.” “Get off the Internet,” he advised. “Turn off your phone. And walk outside. No matter how good two [MFs] look together, no matter how much money people have… everybody lives a regular life. We all breathe the same air; me, you, Jay-Z.”

Instead of leaving it right there, Akademiks feeds off the momentum he was feeling in the conversation and drops a bo-mbshell with personal details about Jay-Z and Beyonce, especially the infamous elevator fi-ght. For years, fans have speculated on who “Becky With The Good Hair” is, referencing Beyonce’s single Sorry off of her acclaimed album would’ve thought Jay-Z and Beyonce was relationship goals until you realized Jay-Z was f—ing some mid-a white chick,” proclaims Akademiks. “Mid! She’s like a ‘6.3’. That’s how it goes. That’s how it goes, bruh,” he said.“Lemonade.”

“I’m not here acting like I’m above anything. I’m just trying to tell ya’ll that when ya’ll look at things from a fan’s perspective, ya’ll be idolizing things that just ain’t true. And that’s about it.” We have all seen how Beyonce took the “lemons” of that situation and made “Lemonade.” Jay-Z has not responded to the new claims by Akademiks. However, the rapper referenced the “Becky With The Good Hair” line on his album 4:44 on the track “Family F-eud.”

wiseaaron31 – These dudes are phony … Act hard . Nothing warrior like from these girly boys that spend all day in a mirror playing dress up your money don’t make you hard bruh

Zampa – Quavo wanna fig-ht over this???? Lmaoward and a clown….. keyboard warrior. Internet person. Maybe u should stop speaking on ppl that dnt fuk with u. U pickn bro. U know u doing… who cares about what your”job description is” these guys dnt FUK with u so stop mentioning there name b4 they get on yo azz cuz all u gonna do is CALL 12!!!