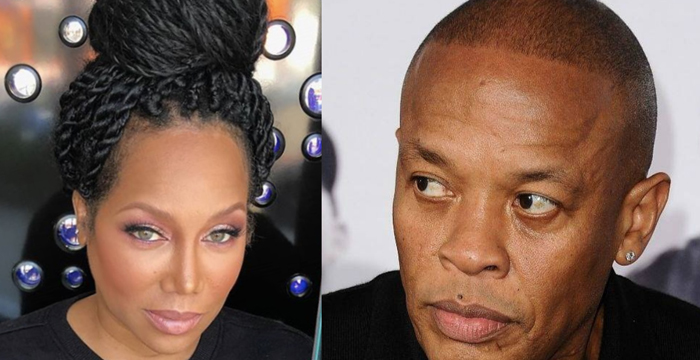 Producer Curtis Couthon has been singing like a canary this week, spilling all the tea on his days at the famed record label. The former producer recently sat down with “The Art of Dialogue” where he was pretty open about the famous men of De-ath Row and the women in their lives. In one particular story he even claimed there might have been some men in their lives too. Speaking Dr. Dre’s relationship with Michel’le, Couthon recalled an charges that Michel’le is claiming to be false.

Couthon did not hold back in the interview. First he revealed that during his prime, Suge Knight was able to pull none other than Halle Berry. The CEO and Oscar winning actress were an item in the 90’s, with Couthon even finding love letters from Berry when cleaning out Knight’s home before he went to coustdy. “You’ve gotta understand who Suge Knight was at this time,” he said. “He was a young dude, millionaire plus, so he had access to all the Hollywood women. I seen Halle Berry at the studio, I just didn’t know what she was there for. She was into him at the time.”

Elsewhere he talked about singer Monica and her various attempts to get to Tupac despite being underage at the time. The then 16 year old would call the studio trying to get into sessions with the rapper. “Monica was only 15; she wasn’t getting call backs or anything like that — you can’t name no female from ’95, ’96 that wasn’t calling 2Pac. Monica couldn’t get back there. She couldn’t get the phone calls.” Monica later went on to date C Mu- rder, reportedly while still underage. Turning his sights to Dr. Dre, he spoke on his relationship with Michel’le.

Michel’le and Dre met when he produced her self titled debut album. She was discovered by Easy E after singing the hook on World Class Wreckin’ Cru’s 1987 single “Turn Off the Lights”. The relationship soon became romantic with the two dating for two years. The two shared a loud relationship that resulted in their eventual seprate and several films focusing on their disputes and falling out including “Straight Outta Compton” and “Surviving Compton”.

Speaking on the couple, Couthon charge that he was present for a conversation where Michel’le stated that Dr. Dre was in b-ed with another man. He said Suge Knight and Tupac were curious if Dre had ever “done anything” after rumors were going around about the producer and asked Michel’le. That’s when Michel’le recalled a time when she called her be-droom’s phone and a man named Bruce answered. He also said she called Dre.”

Michael Brown – “The jury was at the party rapping”. Yo, I depart at that part. Somebody, anybody in Hollywood, please make a movie about D-eath Row Records. I don’t think people appreciate the level of power, and talent involved in this story.

Manzell Broom – This man knows how to interview. He allows you to speak ur piece and then asks a pertinent question. This is refreshing.

Mr. Shabazz – As men, we often call women emotional, catty, messy, and drama queens. However, the bravado, ego, of men makes us just the same for real.

JNFE TV – The interviewer sounds like one of those protected witnesses with the fake deep voice disguise.