50 Cent Says He’d Have No Problem With His Son Being H-it By A Bus, And Some Fans See Why 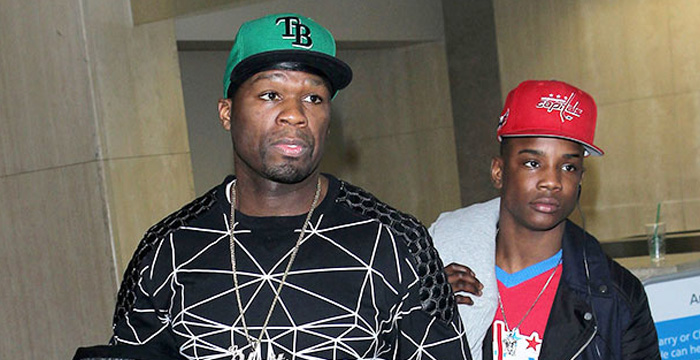 50 Cent just made his estranged relationship with his son even more acrimonious. On Thursday, the rapper, 43, posted a comment on an Instagram photo of his son Marquise Jackson hanging out with the son of his longtime rival, Kenneth “Supreme” McGriff. Crim-inal investigators previously charge McGriff was involved in a plot to k-ill 50 Cent which culminated in the rapper’s May 2000 sho-oting, a search warrant unsealed in 2005 revealed, according to CBS News. McGriff is currently serving a life sentence on unrelated charges.

“if both these little n— got h-t by a bus, I wouldn’t have a bad day,” the “In Da Club” artist wrote. The photo was first posted on Instagram by Kyle McGriff but was later reshared by a fan account, where 50 Cent (real name: Curtis Jackson) made the controversial comment about Marquise, 21, and his rival’s son. After many users judge the Power star for saying such a thing about his son — whom he shares with ex-girlfriend Shaniqua Tompkins — 50 Cent responded to the backlash on his Twitter account and defended himself as a father.

“I have zero ill will towards anyone living on this Earth,” he tweeted on Friday. “The people Shanquois [sic] son looks up to and associates with is a reflection of the negative energy he embraces towards me.” “I paid his mother $1,360,000 in support to afford him opportunities I never had,” he added. 50 Cent has had a rocky relationship with his son for quite some time, due in part to his nasty split from Tompkins.

The Power producer and Tompkins dated for several years in the ’90s and welcomed Marquis together in 1997. The couple had an extended custody battle over the child and didn’t reach an official arrangement until October 2008. During the battle, the rapper admitted that having limited contact with Marquise, who was 11 at the time, was “the toughest, because he’s my motivation.” He added: “My relationship with my son is changing because he and his mom aren’t friends anymore. There’s different channels I have to go through. He has lawyers appointed to him through the court. So I have to talk to his lawyer to get things situated for me to actually get him.”

Earlier that same year, the Long Island home Tompkins and her son were living in, which was owned by the rapper. Investigators on the scene called the incident “suspicious.” Tompkins filed suit against 50 Cent earlier in the year, that he promised her the house – valued at $2.4 million – more than a decade before. Following the fi-re, 50 Cent, in turn, su-ed Tompkins for making defamatory statements, including that he tried to ki-ll her by setting the fi-re.

Most recently, the pair feu-ded after the Power star told Tompkins, who was collaborating on a reality show, that she wasn’t suited for television. “Get a f—ing job,” he wrote in a since-deleted Instagram posted in September. “I own your life rights reality TV is a no go. l don’t know what to tell you, oh go shake your new fake a— over at club Angels,” he added.

Though the rapper has attempted to mend his strained relationship with Marquise several times, his son says the constant drama with Tompkins pushed him away. “It completely went south when I was probably like 10 or 11,” Marquise told Rap-Up in an interview last year. “He wasn’t really around enough. It kind of dwindled down as time went on and certain events happened.” “For me, I just started feeling differently about him because growing up, my dad was my superhero,” he continued.

“He’s on television, he does this, he does this, he would take me to school. It was like having a father who’s Superman, more or less.” “But then, as I got older, you start realizing things or you start seeing certain patterns and it takes an effect on your relationship with people,” Marquise added. “That’s what happened with me and my father. He’s still alive but I can’t tell you our last conversation or the last time we even had a dialogue.”

Kashira Young – He’s miserable, at the end of the day both of their kids were children when their fathers were beefing and it has nothing to do with them. That’s their fathers beef and if they’re adult enough to move on from it good for them.

Taela Rane – This guy attempted to k-ill your grandmother and father & you chillin with his son ? I wish my kids might & that explains the beef with jarule

Gabriel Francis Blackmon – Damn that’s petty 50 Cent! I DON’T get along with MY Biological Dad but I sure as he-ll wouldn’t wish he got hit by a bus! I JUST DON’T communicate with him and that’s how I deal with it! 50 Cent should be FeelingTheBern for wishing ha-rm to his son. Dam…