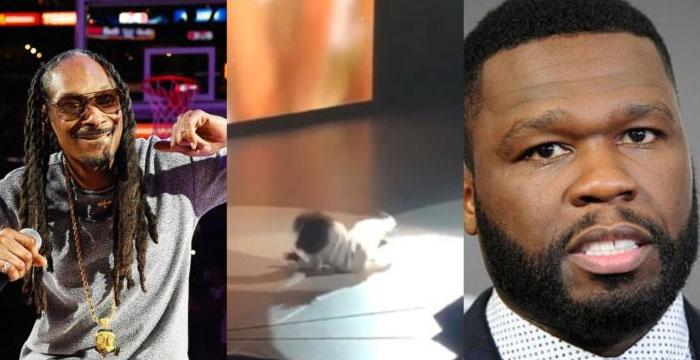 Oprah fell on stage. American billionaire media mogul and philanthropist, Oprah Winfrey had quite a shaky start during her wellness tour in Los Angeles on Saturday February 29. Winfrey was speaking at her 2020 Vision Tour and was addressing wellness and speaking about balance before she was caught taking a hard fall in the middle of an empty stage.

US rappers, 50 Cent and Snoop Dogg who have continuously claimed the talk show host of “pulling down black men”, however, mocked her after the fall. 50 Cent posted the video to his IG along with the caption, “What the happen here, Michael Jackson’s ghost trip[ped] her.“

Watch below Before tumbling on stage, Oprah Winfrey was heard saying; “Here’s my definition of what wellness means to me. Wellness to me means all things in balance. And balance doesn’t mean all things are equal or at peace at all times.”

After a stage assistant rushed to help her up as the shock among the audience turned into supportive applause, Oprah quipped.

“Wrong shoes!” She thereafter ditched heels and opted to go barefoot for a while before switching into a more comfortable option.

The jokes are just too hard-hitting in the comments section of @50cent lol @SnoopDogg getting at @Oprah after she suffered a wild fall – 50 saying Michael Jackson's ghost tripped her and then Snoop Dizzle adding @kobebryant to the joke… lol Savage mode. #SOHH #SOHHNews pic.twitter.com/EN0XIboTxz

Resuming her speech, Oprah said; “Thank you so much. It’s nice to be talking about balance and fall.” commenting on 50 Cent’s post, Snoop Dogg, on the other hand, wrote; “Micheal and kobe blew a gust of wind, balance.

This Article Was First Published On pmnewsnigeria.com