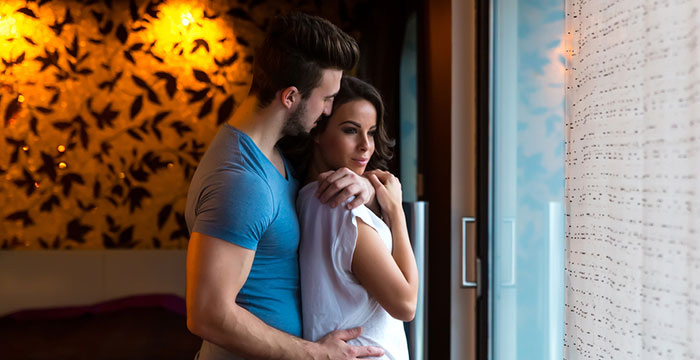 I don’t know what to tell you. It sucks. You’ve stumbled on the signs you’re a side chick. With social media and the fear of missing out, people are afraid to commit themselves to someone because they think something better is going to come along. Now, this isn’t an excuse for a guy to be in a relationship and have side chicks as well. They know what’s right and what’s wrong. So, let’s not get them too much of a sympathy card here.

How to read the signs you’re a side chick

This isn’t even about them. This is about you. Whether they have multiple girlfriends isn’t your problem. Well, of course, it slightly is because you may be the side chick. The whole point is to find out so you can dump. If you have a weird feeling about the relationship and a sense that he’s not solidifying anything between you two, then you could very well be the side chick. But let’s not jump to assumptions. Instead, let’s look at the signs and put the puzzle pieces together. Are you his main girl or his side piece?

1. You never met his friends.

When a guy wants to show off someone he really likes, he first introduces them to his friends. When you meet the friends, it’s a sign that he’s really into you and wants to show you off. Now, you could be a side chick and have met his friends. Typically, he likes to keep you and his personal life separate. That way, gossip doesn’t spread around. [Read: Ready to be a side chick? Follow these drama-free rules]

If you were his girlfriend, he would use his time to make sure that he sees you as much as he can. However, as a side chick, he only sees you once, maybe twice a week. He sees you but dedicates most of his time to his actual partner. So, if he’s not giving you his time, then you ain’t his main girl. [Read: The signs he’s only using you for his enjoyment]

If you’ve been dating him for a while, it’s normal that there would be photos of you on social media. But when you try to take a photo of him, he freaks out and tells you to not post anything online. Come on, you know what this means. It’s not because he thinks he looks bad in photos. It’s because he doesn’t want anyone to find out he’s hooking up with you.

When you’re dating, you usually go on dates with your boyfriend. Maybe you see a movie, go to the mall, or amusement park. Point is, he’s taking you to spend some quality time with him. Netflix and popcorn in his bed doesn’t count. If he doesn’t take you out of the house, there’s a reason why.

When you know you’re only going to be sleeping with someone for a short period of time, you don’t really open yourself up as this will only get you hurt. If you’ve tried to get him to be emotional and he shuts down, he doesn’t want to get attached to you.

But I’m not talking about six pm phone calls. We’re talking about late hour calls. Those are calls if you ask me, and one of the clearest signs you’re a side chick. Anytime after 10 and he’s just looking for some easy and quick relation. Does he ever call you during the day to hang out? Think about it.

When he sees you, it’s usually always the same time and same day. It’s like a routine. He has to keep it like this because he has his cheating down to an art. He has a specific excuse for that time block when he’s with you. That’s why you never see him outside of that specific time and day.

He has a tendency to suddenly disappear without telling you where he’s going or what he’s doing. And what’s even better is that he will magically pop up out of nowhere like nothing ever happened. Maybe he had to chill a bit because his partner became suspicious.

Now, some guys may enjoy the comfort of their own beds, but if they really like someone, they’ll sacrifice a night sleeping in your bed. However, if he never spends a night in your bed, it’s because you’re not exclusive. This is what makes a difference between a girlfriend and a side chick.

10. He’s overprotective with his phone.

No one would be so protective with their phones if they didn’t have something important or secretive about it. If he’s deleting his entire call log every day and has his photos encrypted, then there’s something to question. In addition, if he always walks away when texting or talking on the phone, that’s something to be suspicious of.

It’s funny, just when you happen to call, he never has good reception or his battery is low. Convenient, right? There’s a reason why he can’t pick up your calls after work hours, and this points to one of those strong signs you’re a side chick and nothing more. Perhaps he’s with his family or girlfriend? Now, don’t jump to conclusions in one go, but if he’s not picking up your calls, plus doing a couple other things on this list, watch out. [Read: 16 subtle signs he’s definitely cheating on you]

He only knows where you live, isn’t that strange? Unless he’s embarrassed to tell you that he lives with his mom, there’s another reason as to why you’ve never stepped foot into his house. That’s probably because he’s not living there alone. Hint: it’s not his mom.

Whenever you really need him, he’s not there. If you were his partner, he wouldn’t question anything. He would just do what he needs to help you. But you’re not a priority for him. In fact, when you need help, he may not even be the first person that comes to your mind which is a huge sign on its own. [Read: The signs you’re nothing more than a hookup]

If you found out that he has another woman, you can be damn sure that she’s either his girlfriend or wife. If he’s not treating you like his partner, then you’re the side chick in this story. Those other girls? Yeah, they’re the ones he caters to. You’re simply a side piece for when he needs a change.

Pipi – Never think twice before cutting off ties with fake people including family and friends esp. if they are toxicif you had one of those partners in life, after the breakU GIVE THE BEST ADVICE

Melissa Sanchez – I hate to say it cause its probably unhealthy or something but I honestly have been a lot less stressed and upset since I decided to never trust a woman again and be upfront about only wanting dated someone for a whole year just to find out he had a WIFE & 3 month old baby. I had nooooo idea

J W – Simple. you get put to the side unless he’s bored. You’re like the Xbox video game controller – when he’s finished playing with you and a friend knocks on the door he puts you back on the couch.

IamVee – If a woman is willing to date a man who is already in a relationship, I think she should not sexually engage with him.. because in the end that oxytocin will just get her attached to this loser, feeling all love and all that comes with it. Play it safe, very!

This Article Was First Published on lovepanky.com