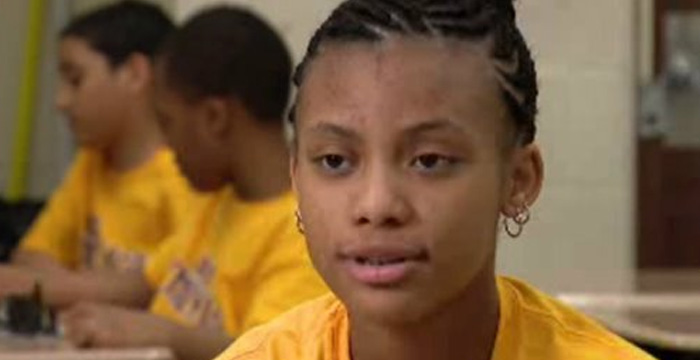 “This is the first time ever in the history of our school and our community that a girl, a seventh-grader, has won first place in a CPS chess tournament,” Ocol said. “She bested even the eighth-graders who were pitted against her in this tournament.” Three weeks before that, Tamya won a bronze in the 2017 IESA State Chess Finals held in Peoria. Ocol said she was the only girl, the only African-American and only CPS student among the medal winners this year.

Tamya’s mother, Andrea Smith, said although Tamya’s father plays chess, Tamya never played until Ocol encouraged her to learn.”It’s awesome and amazing to see my kid do this,” Smith said, adding that she’s noticed positive changes in her daughter. “I’ve noticed that her grades are better,” Smith said. “Chess is a thinking game, and now she’s a thinker. She will think before she makes a move.” Tamya said she enjoys competing, including in a marathon match against a boy in Peoria.

“It was a game that lasted for a long time,” she said. “We were the last two there, and it was challenging because at first he was winning.” Tamya started playing chess two years ago with special instruction from Ocol, who said she is his top math student. She won a medal in a tournament held at Gwendolyn Brooks College Prep in January. She said she works hard all the time. “I’m proud of myself because it’s hard, so I have to [work hard],” Tamya said.

As the team’s captain, she helps coach the younger players because she’s become a role model, she said. Even though the team saw its budget slashed as Chicago Public Schools cut costs last year, Ocol’s young players still have been meeting, improving and winning, he said. “Our kids at Earle can surely excel in chess despite all the challenges they have been facing in their community,” Ocol said. Last April, his all-girls chess team took home a national championship trophy. In the all-girls tournament in Chicago, they competed against 64 schools from across the country. They were one of only two African-American teams. The win was the first national championship team trophy for the school.

The team has gained national acclaim for its success. Some players got the chance to greet and shake hands with Obama when he was in town last October. Ocol said he’s hoping to send Tamya and the rest of the team members to a national tournament in May that is held every four years in Nashville. “If there are enough funds, it will be great to see her and her teammates compete in [what’s] considered the Olympics for elementary and high school chess and the largest chess tournament in the world,” Ocol said.

Earle Principal Cederrall Petties said he’s proud of Tamya and has seen dramatic growth in her since last year. “We are extremely proud of her accomplishments,” Petties said. “She has gone from a shy and withdrawn student to a very tenacious and vocal student this year. I attribute that to her playing chess.” The team competes Saturday against local public schools for the CPS Academic Chess Championship.

Keith Richards – “Just made history” is a poor description of an article written in 2017.” I’m quite certain there are kids doing great things this year who need their stories told.

Jacqueline Deane – At last a girl! In 50 years, the only female chess players I’ve met are my daughters whom I taught, and this young lady. It NEVER made sense to me that it was only guys.

Sondra Oludipe – Congratulations Miss Tamya Fultz On Winning The Bronz Medal In The Iesa State Chess Tournament. May The Good Lord Continue To Bless You And Keep You Safe. We Wish You Much Success In Life. We Love You And We Are Proud Of You!

Elizabeth Grerne – Congratulations sweet child, now they can’t finish you for being smarter than them. They have to swallow that black pill!!

Fred Yanni – Reminds me of the movie of the real life story of the Uganda girl, who grew up in the slums and became the African chess champion. Our world loses when all children are not given an education. JY

Kelvin Gupton – Congratulations Tamya Fultz, continue working hard the results will be positive, because I can’t see you accepting anything less!

Robert Holness – Blm were not criminalsBlack lives matter were not you use our inventions daily start with the cell phone in your hand. The elevator you just took the light you just switched on. And just about everything you use daily. What gives you the right to feel superior or more intelligent than us . White previlige is gone .go to school learn something to compete with us. We go to university’s .we don’t all sell or use powder.why are you afraid of us we are not your enemy. Fear and ignorance lack of information is.

This Article Was First Published on dnainfo.com